How to say ‘I love you’ in Greenlandic: An Arctic Alphabet 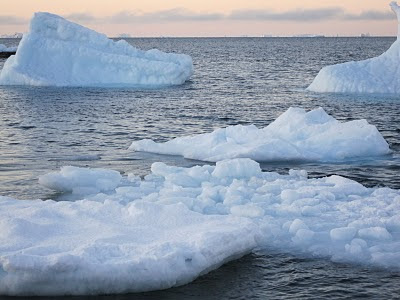 puttaarpoq - to leap from one ice floe to another, to dance


Upernavik Museum is the most northern museum in the world, a lonely building on a rocky island in Arctic Greenland. Last winter I was appointed writer-in-residence there, and - as it seemed incongrouous to be writing in English, a language not spoken by my Inuit neighbours - I began to take lessons in Kalaallisut. I wanted to understand the whispers of the hunters as they waited every morning for seals by breathing holes in the fast-ice, and to be able to respond to the shrieks of the children who tumbled past my door in bright snowsuits and mittens trimmed with polar bear fur.
Kalaallisut is infamous for its many words for different kinds of snow. It expresses the intricate Arctic ecosystem more thoroughly than the writings of any climate scientist. I discovered that the Arctic landscape is always present in the vocabulary. The word puttaarpoq, for example, can mean both ‘to dance’, and ‘to leap from one ice floe to another when trying to cross the sea’. Kalaallisut possesses a smaller alphabet than English, only twelve letters which are densely woven into compound words. Rarely shorter than three syllables, the words express concepts which English tiptoes around with a phrase. I was delighted to find signifiers for 'I am leaning on one elbow' (ikusimmiarpoq) and 'I reel with the delirious joy of being alive' (nuannarpoq). English seems finicky and prim in contrast: little words swimming indecisively this way and that way like minnows trapped in a shallow stream. Each Kalaallisut word is sturdy as a whale: a contradictory water-bound mammal that relies on the ocean depths for sustenance but comes to the surface to breathe. When I read that UNESCO had placed Kalaallisut on its list of endangered world languages, I decided to produce a tribute to its beauty.
How to say ‘I love you’ in Greenlandic: An Arctic Alphabet is an introduction the evocative vocabulary of the far north. From the romantic ‘I love you’ to the pragmatic ‘Make me a hot drink from the old coffee grounds’, a word has been chosen to represent each of the twelve letters of the Kalaallisut language. The thirteenth print in the portfolio, ‘The Last Letter’, is a eulogy for the language.
How to say ‘I love you’ in Greenlandic: An Arctic Alphabet will be hand-printed next spring in an edition of 42 copies. The print portfolio will be housed in a designer binding created by Natasha Herman, of the Red Bone Bindery, Ottawa. To be added to the mailing list for further information on the project and an invitation to the book launch, please email arcticalphabet@gmail.com.
Posted by NANCY CAMPBELL at 10:34

Congratulations! I'm sure I'd love your book. I mailed to request further informations.