The Lit and Phil 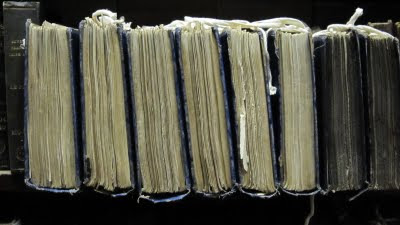 The Literary & Philosophical Society is one of my favourite libraries. This Newcastle institution is located so close to the Central Station on Westgate Road that the parquet floors resonate when intercity express trains pick up speed on their way to Edinburgh. Now the largest independent library outside London, the Society was founded in the tumultuous 1790s as a ‘conversation club’, with an annual subscription of one guinea.

From its outset, the Society had an enterprising, inquisitive and liberal nature: the first women members were admitted by 1804, and various groundbreaking demonstrations of new technology took place, such as George Stephenson’s miners’ safety lamp in 1815. In 1820, The Newcastle upon Tyne Society for the gradual abolition of Slavery in the British Dominions was established at a meeting held in the Society’s rooms. The lecture theatre was the first public room to be lit by electric light, in a demonstration by Sir Joseph Swan on October 20th 1880. 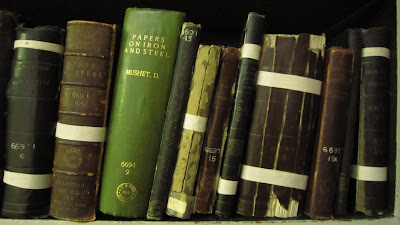 The library collection now holds 150,000 volumes. The first catalogues were sorted by the size of the books, which would have been serious and improving works, such as the industrial treatises pictured above. It was only in 1891 that the decision was made to purchase novels; nobody seemed any the worse for this radical move excepting possibly, as one distinguished member pointed out, “those unfortunate enough to read them”. Novels now form a significant part of the collection, including an ever-expanding choice of contemporary literature. Even so, my favourite pursuit is to turn for entertainment to the older books which describe arcane subjects from chimney sweeping and jungle exploration to the breeding of sheep. 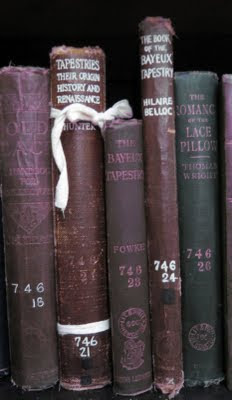 As the Lit & Phil is a lending library, these books have not lost their personalities through years of institutionalisation. They have escaped into people's homes and travelled on trains. They have been quoted from during after-dinner speeches and read to children at bedtime, returning to the library with a souvenir claret ring or a few biscuit crumbs hidden amongst the pages. The worn volumes exude stories, not only textual, but those of past members who enjoyed the books and have left their traces.

A team of dedicated bookbinders is working on the collection's preservation, but it will be some time before the Herculean labour of restoring volumes from over two centuries of publishing is complete. Meantime, some books in the reading rooms betray not only the habits of their readers but also the rescue efforts of librarians. Bias binding is an expedient way to hold the decrepit pages and boards of histories together, and to assist long-sighted browsers a Tippex enthusiast has carefully painted the faded titles back onto their spines. By contrast, the CDs in the famous music collection are very tidily arranged in little scarlet boxes, which almost conceal their contents. 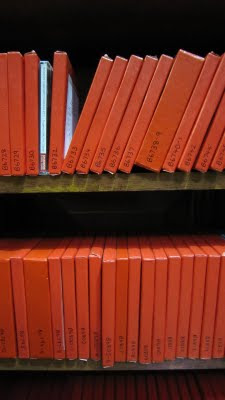 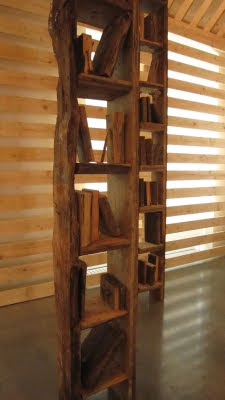 Petr Belyi has been nominated for the Kandinsky Prize, the Russian equivalent of the Turner Prize. His wooden library, alongside other works by contemporary artists, is being shown in an exhibition at the Louise Blouin Foundation in London curated by Oleg Kulik. Belyi studied at the Academy of Arts in St Petersburg and in the graphics department at Camberwell College in London, before returning to live and work in St Petersburg. Much of his work explores the legible and the illegible. 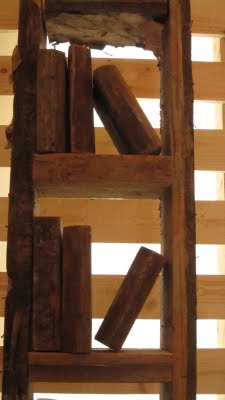 Belyi's library comprises several distressed wooden bookshelves, which might have been rescued from a ramshackle Russian estate. Old scraps of paper are peeling from their sides, and you might expect to see spiders scurrying back to cobwebs between the books, if a contemporary art space wasn't such an unlikely place to find a spider. Strung on scarcely-visible wires from the ceiling, the bookshelves are reminiscent of the ladders in Louise Bourgeois' etchings, which float, never touching the ground or permitting human ascent. But Pinocchio's shelves are less equivocal. In size and stolid construction they echo 1960s tower blocks, rather than the miniature, delicate creature I imagined Pinocchio to be. The rough-hewn planks representing reading matter seem at home within the wooden barack structure which the architect Boris Bernaskoni has created to transform this Western white cube into a more fitting environment for Russian art. 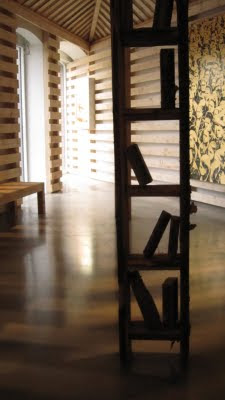 The books from Pinocchio's library point to the form and material of a wooden log, they pass on that memory from which the hero was born. The library preserves the knowledge in which a real boy is conceived.

Imprisoned in the wooden books, Pinocchio represents inaccessible knowledge, the melancholy law of provenance. It's as if Pinocchio's father, with a knife in hand, never came, the father who would have carved, would have given him form, pulled him out of imprisonment. The book-log preserves the secret.
Posted by NANCY CAMPBELL at 17:31 No comments:

ALL THAT IS NOT US 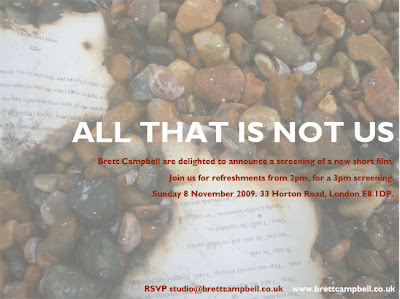 ALL THAT IS NOT US is a short film about a writer's relationship with her novel, from love to embers. The film will be launched on 8th November 2009 in London, with subsequent dates at other venues in the UK still in discussion.

The writer Emily Brett and I have collaborated on a number of projects, and we established the name Brett Campbell for our group work last year. ALL THAT IS NOT US was filmed in Brighton and rural France during 2009.
Posted by NANCY CAMPBELL at 10:40 No comments:

Email ThisBlogThis!Share to TwitterShare to FacebookShare to Pinterest
Labels: ALL THAT IS NOT US, Artists' Books, Brett Campbell, Film 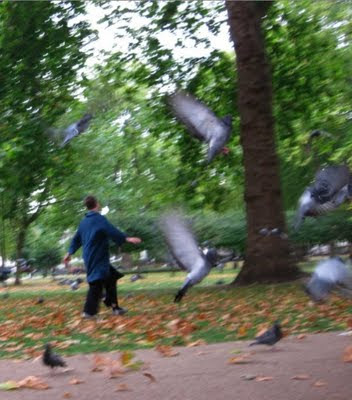 Charlie Brown used to jump in autumn leaves but last Sunday in the park I discovered that pigeons are much more fun. Luckily the brilliant Florian Greimel was on hand to capture the Fall antics.
Posted by NANCY CAMPBELL at 13:17 1 comment: 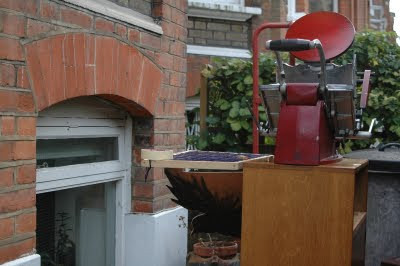 September brings a visit from the Sinister Birds, a duo who travel the country in a small red van, accompanied by an Adana press. They've been recording their exploits and the words of the people they meet in a series of poems which employ collage and automatic writing - before finally hitting the page with some elderly Gill Sans sorts printed in brick red ink.

Pages have been printed on the seafront at St Leonard's, in a Kent copse, and now upon Highbury's pavements. The Sinister Birds will bring their tour to a close in December, by which time many 8pt evocations of England's unlikely corners will have passed across their platen.

The collection will be launched in the new year. It follows the Sinister Birds' earlier titles Land's End and Death Sentences, printed in small editions and already scarce as swallows in winter.

Posted by NANCY CAMPBELL at 12:56 No comments: