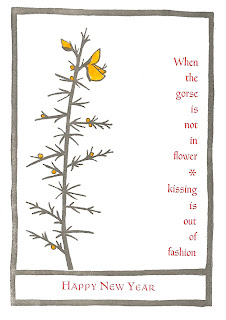 Hearty digital new year's greetings to friends and followers
who did not receive this by post!
Posted by NANCY CAMPBELL at 06:41 4 comments: 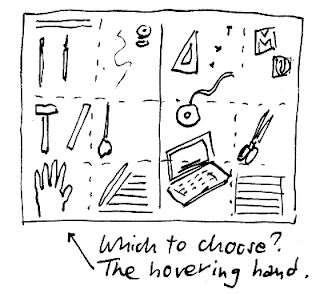 Ensixteen Editions has been posting assiduously over the holidays. If you don't already follow this droll  blog by book artist and illustrator Mike Nicholson, take a look.

This post highlights a project Nicholson has been working on with the printer David Jury which sees both men considering a perennial problem: the distinction between art and craft. Not content with his discussions with David Jury, Nicholson surveyed a group of other book arts practitioners. All of us were invited to consider how we define our work and how the terms affect its reception by the public and collectors.

I should be grateful to Nicholson for giving me another opportunity to fret about where I find myself on the printing/writing scale. His research notes, containing the survey responses, will be published in the Spring edition of the UWE Book Arts Newsletter, which will land here in due course.

Posted by NANCY CAMPBELL at 19:36 No comments:

I've been in the Netherlands this December, working on a series of interviews with Dutch book artists for the magazine Printmaking Today. As a taster for the feature - out in the spring - here’s my conversation with Noor van der Brugge in Utrecht.

Water is a recurrent image in the work of Noor van der Brugge, who runs The Yeats Sisters Press. I take the train to visit her Utrecht studio, following the route of the Amsterdam-Rijn Canal. Van der Brugge made a book while making the same journey.

‘Vice versa is a collection of ships’ names. I was teaching in Amsterdam three times a week. In January I decided I would note down the first ship I saw from the train each day, along with the time and the weather. I collected these notes for the rest of the year. I was able to do it 70 or 80 times – sometimes I forgot – not often! It completely changed my experience of going back and forth to Amsterdam. I was really fed up with this train and, you know, everyone was going to work, so no one was happy. But for me, it became a moment of reflection. Suddenly – I was working on my collection, I was working on a book – I grew more curious about the ships’ names. Some boats I saw more than once. I noticed that 100 years ago most ships had women’s names.’

Although the information provided is minimal, and purely typographic, there is a strong sense of the ships’ characters. A few words create a concrete poem in a manner reminiscent of Ian Hamilton Finlay’s work. ‘I noticed that when you have so little text, your mind starts making connections. For example, this boat was called Morgen Ster (Morning Star) and there was a snowstorm on that day in January, around ten to five, so in my mind, I start making a story….’

Vice versa is a long, flat book, like the barges drifting along the canal. ‘I tried to make the binding look as if this was a useful book for people working at the sluice-gates, a fake official document.’ 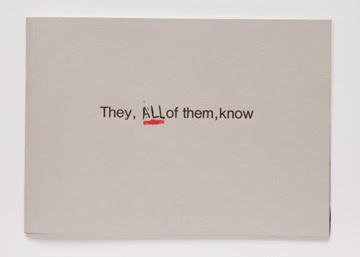 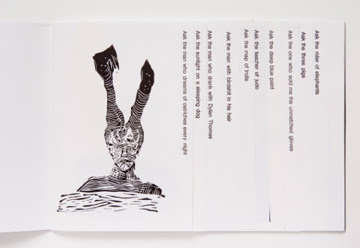 Van der Brugge had been printing for some time before the growing use of text in her work led her to investigate letterpress. ‘I’ve always loved printing. I’ve done a lot of etching and lithography.'

She continues, ‘My final project at art academy was a book – and I etched the lettering – but I was not too happy with it. It was hard to find a place to learn means of printing text. Then one day I met a guy on a train, and we started talking. He said, “Oh, you should go to Henk van Lunsen in Hilversum.” So I spent a week with him, learning letterpress. But I’m not a professional –professionals work much faster than I do. On the other hand, professional letterpress printers – not artists, but commercial printers – often say to me, “You do things that we are always told never to.” I’m not hindered by too much knowledge.’

‘In the Netherlands the printers are mostly nice old men. They realise that if no one takes over from them, within 20 to 30 years no one will know how to print, so they are willing to explain things. They’re so helpful – I find it very different to the artists’ world I knew before, when I was making drawings, which was more competitive.’

And why The Yeats Sisters Press? Surely the two women who established the Cuala Press in 1908 had no connections with the Netherlands? ‘I read a biography of the two sisters, Lily and Lolly. I really admire them, because in the Yeats family, there the poet, W.B. Yeats, and their father the painter, and there was another brother who was also a painter, and they all did amazing things… but no one made any money, and the two sisters took care of everything. They printed like mad. They were involved in the Arts and Crafts movement and published impressive books. So I wanted to honour them.’

She continues, ‘My press may be one of the smallest in the Netherlands. Now I can do everything myself: content, of course; printing; illustration and binding.’

Her latest book, They ALL of them know, is an ‘experiment to combine letterpress and linocut.’ She admits, ‘I love lino. It is such a stark, primitive technique.’ The text is ‘a long poem by Charles Bukowski that goes on and on, a repetitive phrase about asking – only in the last line is there an answer. I’m happy with the form I found because it builds to the conclusion.’ In van der Brugge’s setting (see images above) all the text is visible at first glance, as in a broadside; however, because the sheets are bound as a codex, the images are hidden until the pages are turned. The structure is a good way to underscore the tension accumulating in Bukowski’s poem, which is typical of van der Brugge’s imaginative, yet subtle, approach to binding. She says, ‘I love the book form so much. For me, the turning of a page always brings movement and a little surprise. Some people make books that are hard to see as books – they may be more like teapots, or some other three-dimensional gimmick. That’s nice enough, but still, I respect the simple book form. I like to have a book with pages you can turn.’ 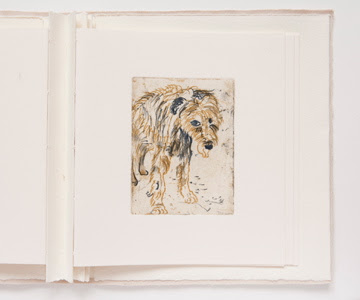 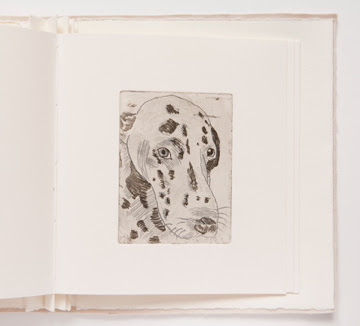 The suede covers of Sombere Honden, a series of etchings of melancholy dogs, feel like a particularly silky pug. Van der Brugge chose to present this sequence in book form, even though there’s no text, because it made sense to collect the prints together. ‘One of my recurrent themes is the art of collecting. Some people collect little bottles or knick-knacks… This is my collection of sad dogs. I like to make the world – in Dutch one says “overzichtelijk” – in English, you have “an overview” – so that all is clearly set out and everything has its place. I grew up in the 1960s, and the education I received, especially in primary school, presented the world as compartmentalised in a certain way. In other words, “If you know all this, you’ll know everything.” Perhaps due to my age, but also, I think, the world around us, it seems like everything has got more and more complicated. I’m still looking for that 1960s simplicity.’ 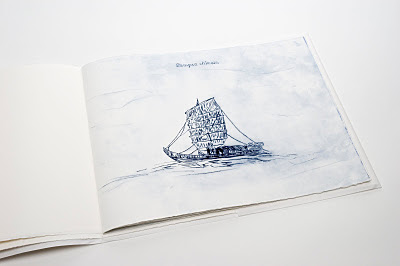 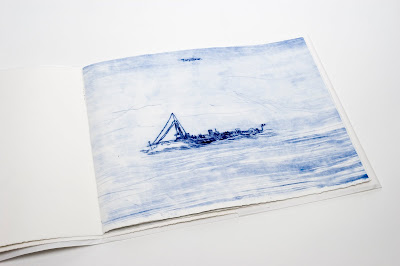 Another book, Voyages, is also about collections – and about ships. This one is purely etchings, too. The images were taken from very small illustrations in the Larousse dictionary. ‘I think these nineteenth-century illustrations are so good – they’re small but they tell you everything you need to know about something.’ The tiny images recall a recent interview with Peter Blake, published in Venice Fantasies (Enitharmon Editions), in which he discusses his delight in using illustrations cut from Larousse for his recent suite of collages.


Van der Brugge has slightly enlarged the images of galleons and submarines, but presents them on a vast page, as if seen from the distance across the sea. The blue background, which covers a whole page. She explains: ‘For me it’s a bit reminiscent of Dutch Delft blue – and there’s a connection there with shipping, because even though it’s typically Dutch, Delftware was painted in China, and then traded across the sea.’

Now Van der Brugge is working on a collection of satirical poems by Piet Meewse, a book which employs linocuts and fold-outs. The latter distort the page by shadowing and then revealing images and text. The fold-outs draw the reader in. She says, ‘I like that element of surprise – you see something but not everything.’ The next book, Lassie, is a response to a poem by a Dutch poet she greatly admires, Tonnus Oosterhoff, who won the most prestigious Dutch literature price this month. ‘I like his work because he tried everything in the search for the right style – some people think a writer should have one style from the outset, in order to be recognised, but I think it’s great to try various things. His poem ‘Lassie’ [about the fictional collie dog, who a featured in many children’s tv and radio shows] fits with my theme of making the world a simple, well-structured place.

I laugh. ‘Lassie finds things, wherever they are!’

‘Yes!’ Van der Brugge agrees. ‘The end is always good – and Lassie’s owner is always good. The villains are always caught or punished – although nothing really bad happens to them, like being shot – but they are punished – they are put into prison or they fall into the water.’ It is a project imbued with optimism, each page bursting with a lively gouache of Lassie on her adventures. ‘I want to make a colourful book this time.’
Posted by NANCY CAMPBELL at 16:22 No comments:

During my trip to New York in October I chatted with Susan Mills in an interview recorded for her Bookbinding Now podcast series. This interview has just been made available here and can also be downloaded through iTunes.

Bookbinding Now is a great series featuring a different book artist every fortnight. I've listened to earlier podcasts to while away the hours spent sewing or making pochoir prints. Scroll down through the podcasts to find my particular favourite: Barbara Mauriello talking about the early days of The New York Center for Book Arts - when the studio was so chilly you had to wear gloves to set type.

Thank you Susan for giving up your time to keep us entertained in our studios!

Posted by NANCY CAMPBELL at 18:03 No comments: 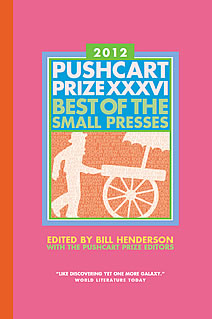 The Pushcart Prize nominations were announced yesterday. Many thanks to qarrtsiluni magazine for nominating my translations of Qavak songs, which they published back in January.