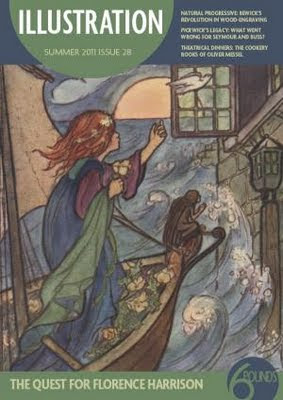 The summer issue of Illustration is full of drama. It appears that the Pre-Raphaelite illustrator formerly known as Florence Harrison was not the true Florence Harrison at all, and that there were hidden depths to two of the earliest illustrators of Pickwick Papers, Robert Seymour and Robert William Buss. While Oliver Messel’s reputation rests primarily on stage design, his distinctive illustrative work is no less entertaining. There's also a reconsideration of the work of Thomas Bewick prompted by Nigel Tattersfield's monumental new study. At the contemporary end of the spectrum, look out for 'Letters from the Arctic', a feature on How to say 'I love you' in Greenlandic.

The magazine can be found at a number of venues including the British Library and Tate Britain bookshops; the feature on How to say 'I love you' in Greenlandic can also be accessed online, thanks to Cambridge University.
Posted by NANCY CAMPBELL at 06:52 No comments:

Email ThisBlogThis!Share to TwitterShare to FacebookShare to Pinterest
Labels: How To Say ‘I Love You’ in Greenlandic, Illustration
Newer Posts Older Posts Home
Subscribe to: Posts (Atom)