The Old Stile Press ... the next ten years 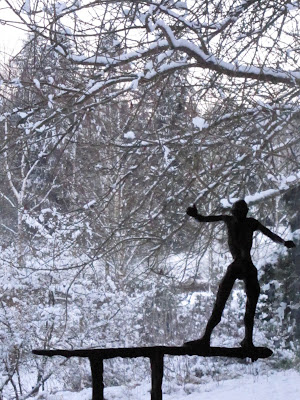 In January I visited Frances and Nicolas McDowall in the beautiful Wye Valley in Wales. And I was unable to leave - for the snow fell deeper and deeper around the house. But as the electricity petered out, and supplies of gin depleted, I was not short of reading-matter. I hunched by the fire, carefully cradling enormous hand-printed folios of works by John Donne, Dylan Thomas and many other writers. The purpose of my visit was to catalogue the prodigious output of the MacDowalls’ Old Stile Press during the last ten years.

The press was founded in 1979, and an earlier bibliography, The Old Stile Press in the Twentieth Century (compiled by Dorothy Harrop), covers publications up to the millennium. Since then the press has continued to issue titles prodigiously: the artist Rigby Graham notes that publications have grown ‘larger and more lavish’ with the passing years. The latest instalment, The Old Stile Press … the next ten years, surveys this recent work. It includes the stunning edition of Arthur Waley’s Chinese Poems with wood block prints by the wonderful Ralph Kiggell; the libretto of Benjamin Britten’s Christmas Sequence with woodcuts by Angela Lemaire, and The Abstract Garden, a ground-breaking collaboration between printer Nicolas McDowall, poet Philip Gross, and wood engraver Peter Reddick.

Frances and Nicolas McDowall are adamant that art is inseparable from life. These books arise from conversations with friends and shared enthusiasms. The wide variety of works collected together in this bibliography demonstrate what can be achieved when books are approached with passion and perhaps, on occasion, slight folly - qualities which are rarely glimpsed within the limits of commercially-driven corporations. Once my fingers had recovered from frostbite, I wrote a brief introduction to the work of the press, which is presented here alongside Nicolas' revelations about each book's genesis, and Frances' feature on the state of book collecting. 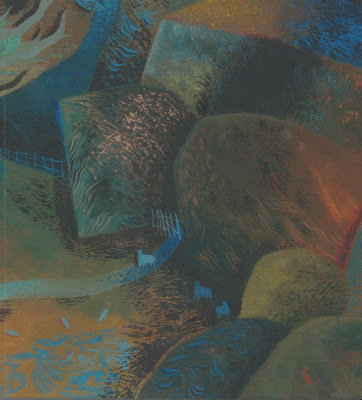 Above is the wonderful painting of the Old Stile Press demesne by Clive Hicks-Jenkins which graces the cover. The edition is limited to 1000 copies, and the first 250 come with a jeu d’esprit printed at the press, ‘Welcome to Spring’ by Gavin Douglas (c. 1510) illustrated with a border decoration by Eric Gill. The Old Stile Press … the next ten years is priced at £45 and is available (plus £4 p&p in UK) from the Old Stile Press.

Here’s to the next ten years!
Posted by NANCY CAMPBELL at 16:03 3 comments: 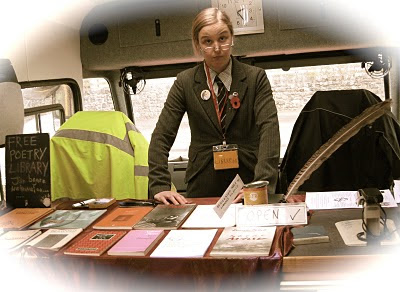 Norman MacCaig was an avowed 'two-fag' poet. I wonder whether The Itinerant Poetry Librarian would have let him smoke even one while browsing her collections. One of the Bye Bye-Laws of the Itinerant Poetry Library states, with characteristic precision, 'No person shall smoke or strike a light in any part of the library set apart for the use of the public without the permission of the library officer, and except in any part thereof which is for the time being used as a smoking den or in which, when it is being used for an educational, cultural or other event under Section 20 of the Act, the Library Authority allows smoking.'

Such are the curious legalities that have been preoccupying the Librarian since 2006, when the Itinerant Poetry Library began 'travelling the world with a library of "lost & forgotten" poetry, installing the library and librarian and archiving the sound, poems and poetry of the cities, peoples and countries we meet'. No wonder the Librarian's back is a little stooped, or that her brow displays more lines than Milton's Paradise Lost.

Last Friday found the Library sharing the premises of the Highland Mobile Library Service, itself somewhat itinerant, but temporarily parked opposite the SPAR on Lochinver's main street. It was raining. As if taking a fashion cue from the gung-ho shooting parties in less metropolitan parts of Assynt, the Librarian's grey pin-stripe suit provided camouflage against the damp tarmac of the parking lot. 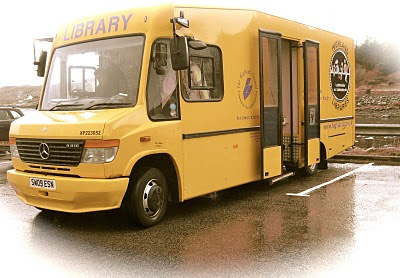 The rain-streaked doors slid open silently at my approach with institutional rectitude. I found myself signing up to the Library Bye Bye-Laws, without having read them, and then committing several infringements while perusing the day's display of books on the theme of 'Poetry In Languages That Trip Off The Tongue.' Did I dare to confess to not speaking Hungarian? I did not. Volumes of Modern Russian Poetry lay alongside Ancient Greek Love Poems. The Librarian looked a little flushed, having just delivered an impromptu educational session based on the latter to three young visitors.

While the books laid out to trip the tongues of Lochinver were relatively conventional in format, I was intrigued to read in the Bye Bye-Laws that the Library defines 'book' as 'any and every book, poem, journal, pamphlet, music score, manuscript, picture, print, poet, photograph, engraving, etching, deed, map, chart, plan, cheese sandwich, gramophone record, cassette, compact disc, mini disc, web page, pre-recorded tape, floozies, film and any other article of like nature.' What did the Librarian have in her suitcase?

The Library website details in full the complex and worthy aims behind its existence, the essence of which is 'the idea of poetry as a unique form of human communication, and thus a unique form of knowledge; and the idea of the public library as both recycling-knowledge space and civic space – concepts which we believe can also be used as models for sustainable growth in order to oust ourselves from the current cul de sac that is consumer-led, maximum profit-centred culture.' Hear, hear!
Posted by NANCY CAMPBELL at 19:19 No comments: 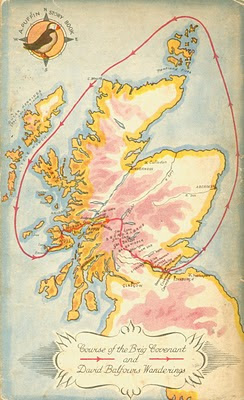 'And so you and me, David, can sit down and eat a bite, and breathe a bit longer, and take a dram from my bottle. Then we’ll strike for Aucharn…'

...Or Assynt, for the Norman MacCaig Centenary celebrations. Aliens landing in the small coastal town of Lochinver could be forgiven for thinking that Norman MacCaig was Scotland's greatest fisherman, for his fishing exploits have received almost as much media coverage as his poetry this week.

There are many poets in town for the celebrations, and poems by schoolchildren are tacked up in every shop window. Last night we celebrated Remembrance Day with 'Poetry, Peace and a Pint' in The Caberfeidh. Such warmth emanated from the twenty poets and artists around the pub table that it seemed we might indeed 'reconstitute the world' as Adrienne Rich writes in 'The Dream of a Common Language'. Rich's poem was read by a local artist who told how she had scratched the verse on the door of a Dumbarton police cell with her zip while locked up overnight following a peaceful protest against Trident. Other readings including a hearty dose of Edward Thomas, a fragment from Kenneth White's long poem 'Labrador', and Mandy Haggith's beautiful rendition of a poem by Iyad Hayatleh, a Palestinian poet born in a Syrian refugee camp who is now living in Glasgow. 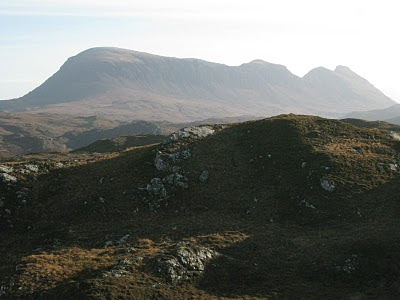 The programme of centenary events, organised by Top Left Corner, culminates tonight with a ceilidh at which Liz Lochead and other poets will be reading. (Norman MacCaig was fond of a ceilidh, and best among the MacCaig Trivia I have gleaned this week is the fact that his favourite tune was The Jig of Slurs.) I'll be presenting a new poem about the Arctic, which feels fitting in this landscape which is so redolent of Greenland. I've been told that Assynt and Greenland were both part of the vast land mass 'Laurentia' which was situated over the south pole in the Cambrian Period, before moving north. Thus the Highlands only met the rest of the British Isles during the great plate tectonic collision of the Caledonian Orogeny around 500 million years ago, and have more geological affinities with the Arctic. Perhaps this explains, not only the environmental synchronicities, but also why I have found several people here who have, they say casually, 'just returned from Greenland', including remarkable photographer Iain Roy. 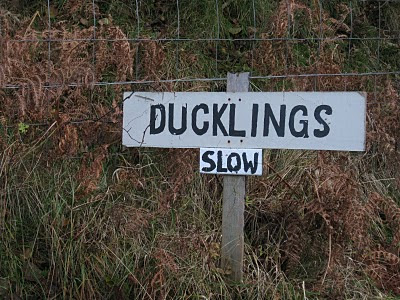 Posted by NANCY CAMPBELL at 09:11 No comments: