Meliors Simms - Living in the Anthropocene 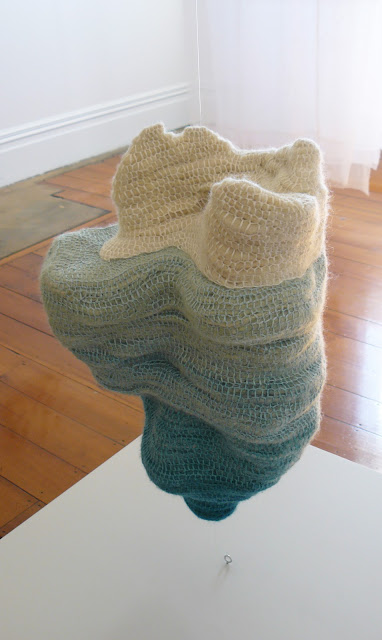 This enormous suspended Big Berg is one of many astounding interpretations of ice by Meliors Simms. I was excited to discover Simms' wooly icebergs in her solo exhibition Imagining Antarctica in Hamilton, New Zealand earlier this year, and she kindly agreed to tell me more about her work.


Simms is best known as a textile artist, but her practice also incorporates poetry, book arts and letterpress printing - not to mention blogging. She comes to art with a background in Environmental Policy; she confesses 'it was my frustration with trying to effect change through policy channels that led to making art to try and nurture my disappointed soul.'


Simms describes the theme of her recent work as 'all about living in the Anthropocene'. She explores 'the impact of human activity on different environments; from a speculative future (science fiction) perspective, a deep time (geological ages) perspective as well as from our present moment.'


'Concerns about climate change, pollution, overconsumption, species extinction, etc. infuse my work overtly and subtly. The ideas I explore all relate to these issues (coral reefs, mangroves, mines, oil spills etc.). My materials (e.g. repurposed fabrics and offcuts) and commitment to handwork rather than using machines are chosen in part to minimise the footprint of my work.' 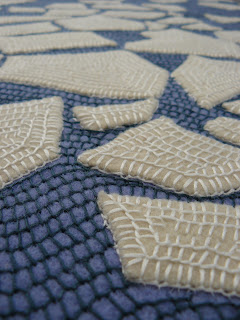 Simms has always liked to make things with her hands, but her identity as an visual artist emerged seven years ago while making artist's books. She explains how she had no choice but to make the bold move away from paper to alternative materials: 'Spending most of 2008 living in Australia's Daintree tropical rainforest put paid to my work with paper and I took up crochet and embroidery as a medium more compatible with that environment. Returning to New Zealand led to a transition where I was making books as well as stitching, but these days the textile work is my main focus.' 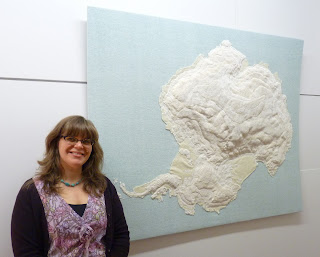 Meliors Simms with My Antarctica (155x122cm)


Simms has been thinking about how to represent the snow and ice textures of Antarctica for many years, and it seems that in textiles she has found the perfect medium. She says: 'I developed a new textile sculptural technique in order to realize my vision, cutting up old woven wool blankets along the contour lines of a map of Antarctica and embroidering them into a layered landscape relief. I started with a small(ish) representation of Ross Island and then immediately began work on a large scale map of the continent, My Antarctica, which ended up taking eight months of hand-stitching to complete. I spent another year making Antarctic-themed work to fill out a solo exhibition with my big continent at its centre. Imagining Antarctica was my most successful show to date, and utilised a range of textile techniques to explore the history, present environment and future threats (of oil spills) to Antarctica.'


But it's not just Antarctica that interests Simms. She has two other, closely-related projects under development: 'I'm making clouds, or rather representations of intangible phenomena including nuclear radiation, aurora borealis and volcanic ash clouds. Crocheting delicate spheres is a nice counterpoint to the weighty, grounded subjects and dense layered materials I've been focused on. I'm also getting ready to transfer my energy to the other pole, specifically the ocean floor of the Arctic Circle, a large-scale work that will probably pair with My Antarctica in a polar diptych of layered felted and stitched blankets. I swore after My Antarctica that I wouldn't make anything that size again until I had a bigger studio but I'm rearranging the furniture right now to make room for an Arctic the same size.'

I asked Simms whether any particular artist or writer had influenced her Antarctic work. She wrote back: 'The greatest inspiration is Kim Stanley Robinson's speculative fiction novel, Antarctica, which I read and reread regularly. I turned to his writing again and again for the lyrical descriptions of snow and ice as I was attempting to make my own interpretations in wool. It's also a rip-roaring environmental thriller with a strong female lead character.' The New York Times review is equally enthusiastic - this is one to add to my reading list!

In addition, Simms was generous enough to point me in the direction of other New Zealand artists who feature the polar regions in their work. 'New Zealand's proximity to Antarctica and significant activities there mean that Antarctica is a common theme for NZ artists,' she says. 'My favourite interpreters include Colleen Ryan-Priest (cast glass ice), Gabby O'Connell (delicate huge paper iceberg bases), Jane Ussher (photographer of historic huts in Still Life) and Claire Benyon (multimedia artist and poet).'


You can support Meliors Simms' future projects by buying her work or follow her on Twitter @meliors for updates on all the ideas mentioned here.
Posted by NANCY CAMPBELL at 13:25 2 comments:

With the Scottish Arctic Club

Thanks to the Scottish Arctic Club for inviting me their annual gathering in Fort William last weekend, to speak about How to say 'I love you' in Greenlandic and The Night Hunter. I spent a few days at the base of Ben Nevis in the company of distinguished polar explorers and naturalists. It was great to meet such knowledgeable polar enthusiasts, including the first woman to ski across the Greenland icecap (now in her eighties), and the team who completed the first circumnavigation of Greenland in the year 2000. 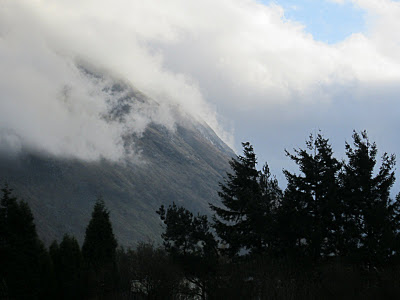 My lecture was followed by dinner and great quantities of merlot and malt. Out came the Society's map, a large, multi-section American military chart of the Arctic region ('It's not very accurate, but it's a decent size', one member apologised). Several coffee stains from previous festivities were posing as islands. 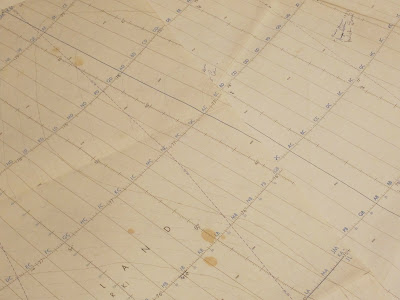 As the evening wore on, intrepid members crawled across the map to mark the furthest points they had reached that year. 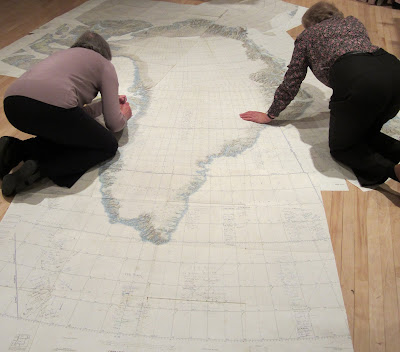 I was invited to mark up my residency in Upernavik, and I was intrigued to read the names of those who had been there before me. 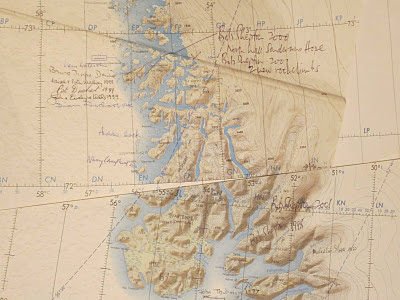 Posted by NANCY CAMPBELL at 18:51 No comments: 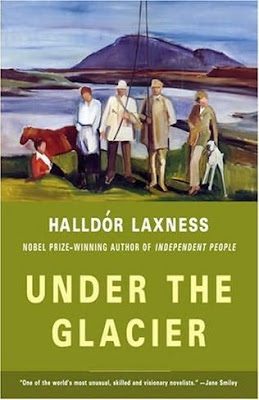 I found this beautiful description of the Snaefells Glacier in Halldor Laxness's novel Under the Glacier (first published in Iceland in 1968). I particularly like the closing lines which describe glacial ice as looking like a print - a nice reversal of my daily attempts to make prints which look like glacial ice.
"... The undersigned began to contemplate the glacier. In actual fact the glacier is too simple a sight to appertain to what is called beautiful, which no one knows the meaning of and by which everyone means something different from everyone else: one of those words it is safer to not use about a glacier nor anything else.
"The undersigned has never before seen this mountain glacier except from too far away, but was now about to become acquainted with it for a while. The mountain reminds one of an upturned earthenware bowl, the glazing a little bluish at times, but sometimes like gold-rimmed transparent Chinese porcelain, especially if the sun is low in the west over the sea, because then the rays play on the glacier from two directions. From here the glacier looks somewhat coarse-grained like a print that isn't good enough; the ice is rain-sullied in many places in the lower regions, and has developed streaks like a smudged print."
(Translated by Magnus Magnusson)
There's more on the novel itself in a great review by Niranjana Iyer over at the blog Brown Paper.
Posted by NANCY CAMPBELL at 15:38 3 comments: 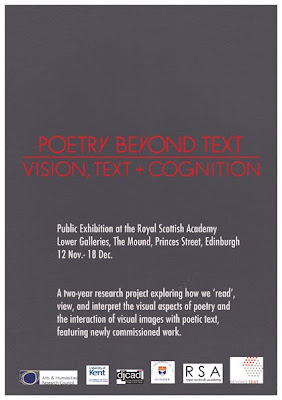 Collaborations between poets and artists will be on view in POETRY BEYOND TEXT at the Royal Scottish Academy in Edinburgh from this Friday. Dinner and a Rose will be there, plus exciting new work from John Burnside, Thomas A. Clark, Deryn Rees Jones, and Helen Douglas of We Productions.
Posted by NANCY CAMPBELL at 23:30 No comments: