The theme this year was chosen by wild artist, king of the rubber stamp, and long-time Nessie aficionado Steven Fowler. He decreed that the United Artists, rather than reading and responding to a single work of fiction as in previous years, would research the history of publications around the Loch Ness monster, and contribute a new work to the genre. As plans began to take shape, the name BOOK ISH NESS (created by Linda Parr) was adopted for the project. 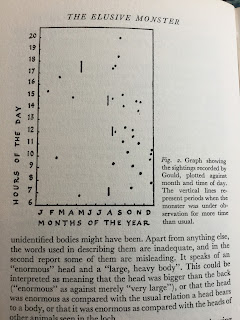 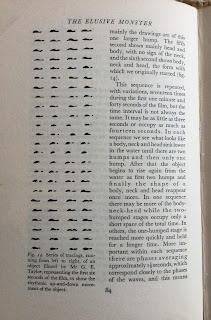 This year's programme was the most adventurous yet, surpassing previous research in the woodlands of Oxfordshire (The Secrets of Metahmeralism, after Donna Tartt's The Secret History) and the takeaways of Bristol (TOAST: A Night on Weevil Lake, after Douglas Copeland's The Gum Thief).

Primed with studies of cryptozoology and hazy evidence of 1970s monster-spotting technology, members of the public sent in evidence captured around the globe. The Loch Ness Investigation Bureau (officially formed in 1961 and closed in 1972) was Rebooted in response to this flurry of sightings. Thirteen members of the Bureau met at Fort Augustus on 10 March and spent five days carefully observing Loch Ness from different look-out points including the Nessieland attraction at Drumnadrochit, the turrets of Castle Urquhart, and the great locks at the end of the Caledonian Canal. This gruelling observation schedule, from dawn to midnight daily, led to many new and interesting discoveries. Sarah Bodman, the expedition's head chef, did an inspired job of feeding hungry LNIBR members at Morag's Lodge. 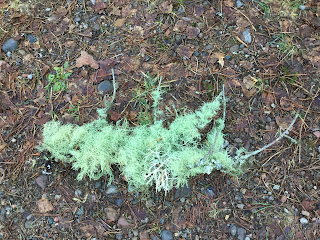 Even in the woods there were monsters 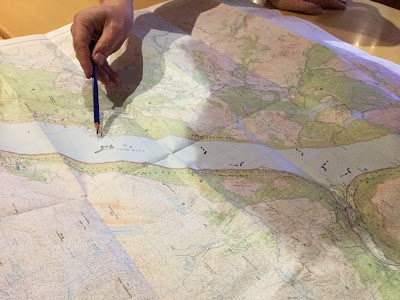 Beginning to map the monster

I began a ballad recounting our investigations, but - true to the spirit of Hunting The Snark which inspired it - it remains unfinished. Thankfully other Investigators have been more organised. You can see documentation of LNIBR preparations and excursions, records of sightings, and other results of the trip (both visual and verbal) and buy a copy of the BOOKISHNESS publication at the UWE Book Arts Website. And there's a movie too! 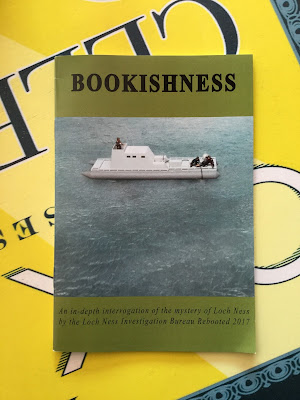 BOOKISHNESS,
containing contributions from many monster hunters
Posted by NANCY CAMPBELL at 09:06 No comments: 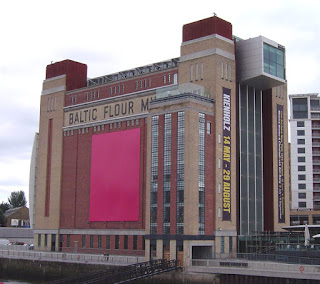 The market is a wonderful event that I’ve been proud to exhibit at for the last three years. This year look out for Stichill Marigold Press (run by poet and former merchant seaman Leonard McDermid - also once my primary school art teacher!),  Visual Arts in Rural Communities and of course the impassioned presswork of organiser Theresa Easton. Full programme info below.

This two-day event is FREE and accompanied by a series of artists’ interventions: BALTIC Freelance Artist, Bethan Maddocks will be delivering a free drop in 3D pop-up book workshop on Saturday. Sunday Nicola Singh plans to engage book market visitors with an evolving page projected onto the wall of the book-market. Foundation Press will be bringing their Risograph Printer for both days, working collaboratively with visiting artists in their pop up space on Level 1, creating a new body of work in performance and print.

Now that A Book of Banished Words is published, I’ll conclude my posts about The Polar Tombola with the story behind the making of the ‘snowball’ which players picked their cards from during performances. (Thank you to everyone who took part!)

The drum holding these Greenlandic word cards was an obvious nod to the Italian tombolare that was the loose model for my game. So it ought to be round... but what else? As I began to design it I toyed with the idea of using a globe to reference languages around the world, because as The World Atlas of Languages in Danger demonstrates, language extinction is not a problem specific to the Arctic. But I soon discarded this idea in favour of something more snowy – evoking the traditional Inuit dwelling or iglu as well as childhood snowball fights.

I visited the ceramics department of the Victoria and Albert Museum to source ideas. I started by studying how designers made tableware representing other objects, such as swans, snakes, cauliflowers and asparagus. (Please excuse the poor quality of the snaps below, they were never intended for publication.) 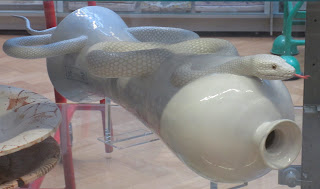 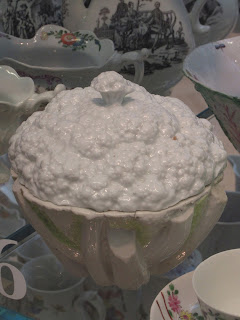 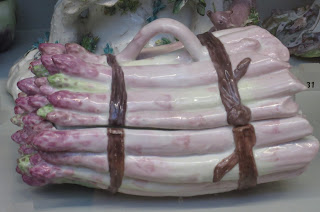 But the objects that appealed to me the most were simpler, in particular a beautiful porcelain moon jar by Park Young Sook (2006) – the refined clay with its translucent, flawless glaze seemed to evoke the same pristine beauty many people associate with the Arctic. Moon jars were used as ritual vessels in South Korea during the Chosun period. What was I embarking on, if not a ritual? I don’t want to reproduce my photo here because it doesn’t convey any of the awe I felt looking at the moon jar, but you can view it in the online V&A catalogue.

Knowing I’d never achieve the smooth perfection of Park Young Sook’s vessel, I started to look at other textures, such as... 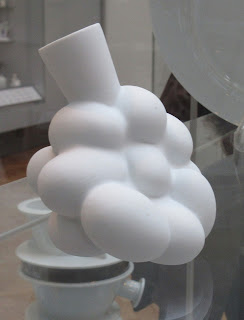 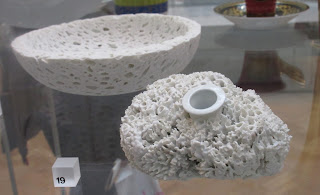 ... Egg Vase (above), Foam Bowl and Sponge Vase (below), designed by Marcel Waanders for Droog, in collaboration with Rosenthal. (Made by Moooi. Amsterdam, The Netherlands, 1997. Unglazed porcelain, cast from hard boiled eggs inside a condom, artificial foam and a natural sponge.) 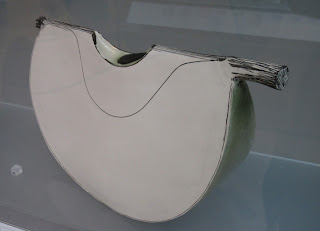 ... and Omenanlohko (made by Gunvor Olin-Grönqvist at Arabia, Helsinki, Finland, 1986. Glazed stoneware.)

Finally, I looked at ceramics that included text. Nushu (below, 2006) by Sara Radstone is an evocative series of stoneware slabs, painted with slip and grey stain. 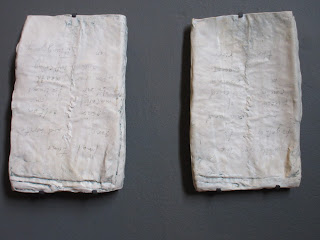 Nushu is a script used to write a local dialect of Chinese spoken in Jiangyong County in Hunan. It was used exclusively by women, and translates as ‘women’s writing’. It developed as a form of private communication, sometimes embroidered onto fabrics or written on fans. Radstone’s text, written lightly and upside-down across a series of book-like forms, reflects the clandestine nature of the script...

...and far less subtle, but just as fascinating, this piece of French tableware which wittily mixes verbal and visual signifiers. 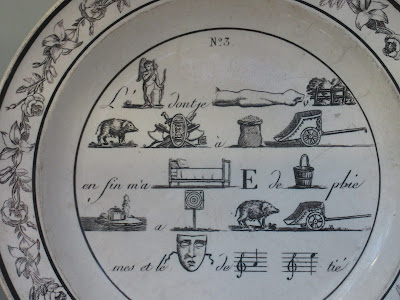 I also loved this early nineteenth century gilded plate, with its bobbly enamel sea urchin that –entirely coincidentally – is not so very different in appearance from my own finished piece.

In the end I chose to use a material much less ambitious than ceramic, and closer to my usual medium: papier-mâché. The cause of my return to paper was spotting a work by Chun Kwang-young in the museum. Aggregation10-SE032RED (2010, below) is composed of many hundreds of pieces of Styrofoam, individually wrapped in pages of books printed on hanji paper. Hanji has multiple uses in Korea – including wrapping household objects for storage. The surface this work is full of cracks and imperfections, and you can’t make out the original meaning of the texts. The curator writes: ‘These complex defects symbolise the difficult history of Korea, but the strong paper reflects the resilience of the Korean people.’ 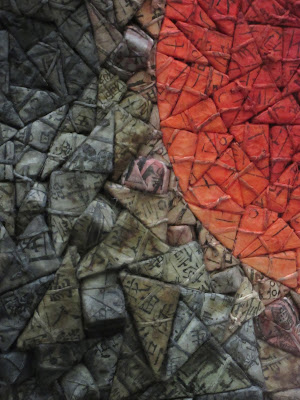 I liked the idea of taking apart a printed object to make the drum, which tied in with The Polar Tombola’s movement from the dictionary page to performance. Papier-mâché takes several days, as the thin strips of newspaper are dipped in an adhesive made of flour paste and applied over each other in a rough wove. There needs to be drying time between each application, and then a number of coats of white emulsion paint. The time it took to construct the two hemispheres of the drum gave me plenty of time to reflect on the process. As I covered one thin strip over and across another, current news stories disappeared under the damp paper and film of glue. It was a word-vessel made out of words. Slowly the object began to form, just as in the Arctic the gradual accretion of ice crystals, at first barely perceptible, becomes a solid layer over water. I thought of the Greenlandic words the drum would hold. One of these ‘amissaq’, has the dictionary definition: ‘boat skin, fish skin used for straining coffee’. I remembered the many new skins and surfaces I encountered in Greenland: permeable and impermeable, containing and protecting.

I enjoyed making the papier-mâché drum enormously, the wordless activity being a respite from some of the intensive writing I’d been doing. I liked the rough edges of each hemisphere where they were pulled off the mould – this tied in nicely with the casual ‘village hall’ aesthetic of the project as a whole (as suggested by Small Publishers Fair director Helen Mitchell). Now that the snowball has travelled with me around the UK for two years, those edges are a little rougher, and the snowball is once again empty of its words. 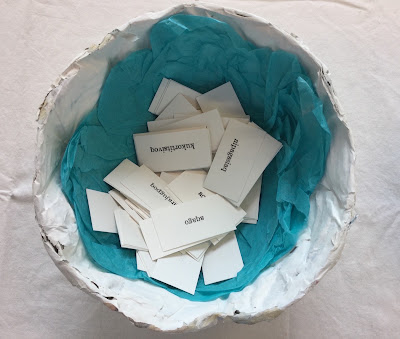 Posted by NANCY CAMPBELL at 16:23 No comments: