‘This is the first time I’ve looked in a dictionary since my A-levels,’ confided a hipster, eagerly flicking through the yellowing pages of my Greenlandic-English dictionary.

The Astonishing Polar Tombola was operational over Friday 5 and Saturday 6 November at the Small Publishers Fair in Conway Hall, London. Helen Mitchell, the fair’s organiser, sees the venue as something of a ‘village hall for London’, and with that in mind I combined an austere arctic aesthetic with a vintage village fête look in designing the tombola. 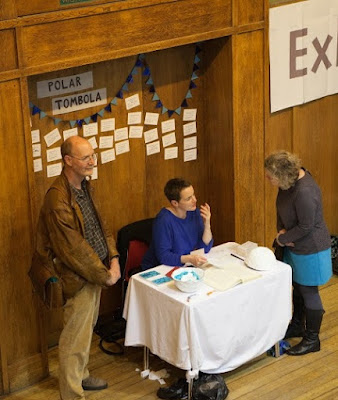 Tombola has its origins in the cold, dark months of the year. The game (which draws its name from the word tombolare, to tumble or turn a somersault) is inspired by the raffle played by Italian families at Christmas time, with symbolic prizes and candied peel. The Polar Tombola is likewise a game of chance, one that turns expectations upside-down, as participants are invited to pick a Greenlandic word from a giant papier-mache snowball, and discover its meaning. Players are rewarded with a Fox’s Glacier Mint rather than preserved Mediterranean fruit.

Over the course of the fair around 100 Greenlandic words are taken from the snowball. Everyone is curious to discover the meaning of the unfamiliar word, which frequently demonstrates an eerie synchronicity with their circumstances. I begin to wonder whether I should have set up shop as a fortune teller instead...

The game is intended to highlight the fact that the West Greenlandic language (Kalaallisut) is vulnerable, according to the UNESCO Atlas of World Languages in Danger. Language is especially important in places suffering the rapid effects of climate change: how can non-native scientists hope to study the arctic ecosystem without access to the knowledge of generations enshrined in the languages of the region?

I encourage players who have picked out and learnt a Greenlandic word to leave behind a word from their own language. It’s a big commitment to vow never to use a word again (as exemplified in my book proviso), and some people decide not to play: a few punters object to such self-censorship, and others just can't decide which word to leave behind. I certainly give away more Greenlandic words than I claim English ones. While I’m secretly pleased that people want to break the rules, the notion of exchange is important to me. 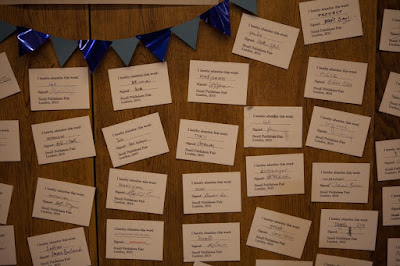 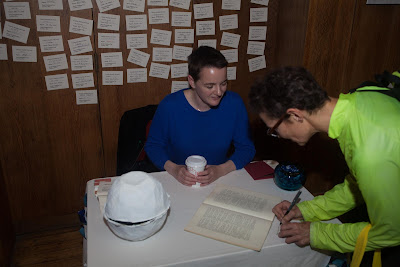 t is pleasing to think of Greenlandic words in circulation in the UK, with new ambassadors for the language such as artist Steve Perfect, who has been introducing London bartenders to that staple cocktail ingredient, kaggsuk. 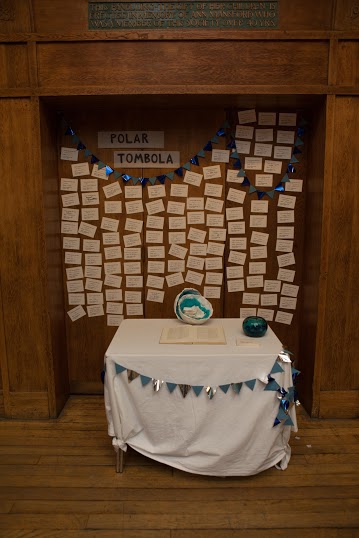 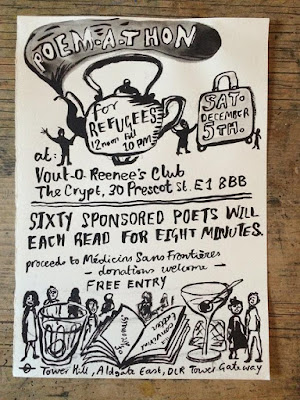 The initiative of poet Jacqueline Saphra, the Poem-A-Thon for Refugees began as an attempt ‘to do something to raise funds and awareness to make a small contribution to alleviating this terrible humanitarian crisis.’ In the last few weeks over £5000 has been raised.

At the Poem-A-Thon sixty poets will each read for eight minutes in the course of a day. All donations will go to Médecins Sans Frontières (MSF) and its work with refugees in the Mediterranean.

How can you help? Sponsor me or another poet of your choice or drop in (for a quick coffee or a long cocktail) during the day to cheer on the poets.

Poetry makes nothing happen? Thanks to Jacqueline and her committee for this opportunity to make a small difference.
Posted by NANCY CAMPBELL at 08:27 No comments: