Following last month's gig, The Golden Hunger, at the Holywell Music Rooms in Oxford, I will be reading with the same line-up again in January. This time the venue will be Dorchester Abbey in Oxfordshire, for an invitation-only filmed performance. This immense and beautiful building will become an echo chamber for the eerie vocals of Macgillivray and Gwalia's bitter ballads, Iain Sinclair's geographical musings and Iain Bole's poetic, political commentaries.

The Abbey has a particularly strong tradition of imagery, and the pigment of 14th century angels still clings to the plaster. An enormous stone Tree of Jesse climbs the chancel and shelters the brilliantly coloured glass in the windows. 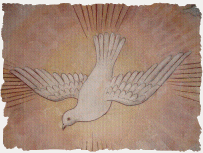 The Iron Age fort on Wittenham Clumps nearby dominates a landscape settled since remote antiquity. Here in 635AD the missionary Bishop Birinus, sent from Rome by Pope Honorius I, preached to Cynegils, King of Wessex. Cynegils must have been convinced by his oratory, for he was baptised, with Oswald King of Northumbria standing godfather. Some years later the church was founded in a valley of willows and misty water meadows as a shrine for Birinus' remains. It will be an honour to read in such an ancient setting.
Posted by NANCY CAMPBELL at 08:07 No comments: