a butterfly, a breath, a nothing - Zoran Music

An unexpected follow-up to Music's words (quoted in the previous post) came at a special meeting of the Magic Circle at the Scott Polar Research Institute, Cambridge, today, where the topic under discussion was 'Ghosts and Apparitions in the Field'.

Piers Vitebsky, in a talk which carried forward themes from his research on loving and forgetting ancestors among the Sora, considered why Baptist ghosts in tribal India behave differently to pagan ones. Physical death - by tiger or smallpox, for example - is only the first of several stages of death among the Sora. The final stage, which releases the dead person's spirit from its duty to torment the living, comes when no one on earth survives who retains any memory of the dead person. Only with this liberation from memory can the individual die a final death in the underworld and the soul appear - as a butterfly.

The coincidental reference seemed worth considering in relation to the nature of creative work too. While some may aim for nothing less than immortality and consciously impose their ego on their art, Music's work achieves its (equally unmistakeable) character through its elusive style. Dull tones merge into one another and the viewer's attempt to focus on the equivocal forms depicted (faceless horses seen from behind or distant mountains, for example) is foiled. At their most extreme, these works might be paintings on linen turned to the wall, so that one only sees the bleed of paint through the cloth... was Music aiming for something or 'nothing'? Is his work a double bluff? And how is his painting technique related to his conflicting desires both to remember (and to testify) and to forget? 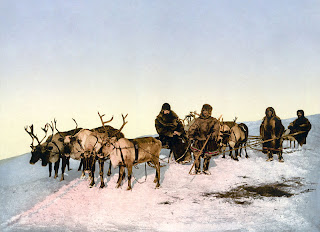 Other presentations, all splendidly stimulating, included Dr Shane McCorristine on the role of psychic messages obtained through mesmerists and clairvoyants in tracing Sir John Franklin's Arctic Expedition during the 1840s (a perfect complement to the work I've been doing on the actual correspondence this expedition attempted to send back to Britain). Dr Olga Ulturgasheva spoke about how young Eveny Reindeer people make their dreams come true by predicting the future (above). Dr Kostas Zorbas served Turkish Delight, which became less palatable once he began to tell the macabre tale of a Siberian albys who sliced off chunks of her own flesh to feed her lover. Dr Gilly Carr provided an eerie and very personal account of hauntings in the German Bunkers of the Channel Islands.

Posted by NANCY CAMPBELL at 08:23 No comments: 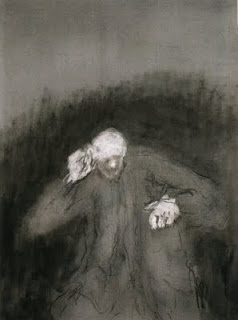 Zoran Music, Grey Figure (1998)
After a quick tour of Tracey Emin’s cluttered and confused retrospective (love is what you want) at the Hayward Gallery, I retreated to the calmer Estorick Collection on Saturday afternoon. 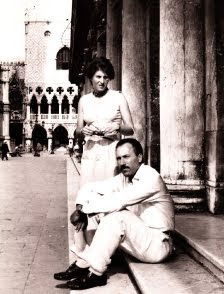 The press release, which in places might be mistaken for a HELLO! feature, informs us that Music and Barbarigo married but continued to lead independent lives: ‘They maintained separate apartments, meeting to dine together and to discuss the day’s events each evening.’ I'd love to have eavesdropped on those conversations. Did they analyse his penchant for painting horses? The fact that chairs symbolized all human life to her? Did they discuss their obsession with light – especially the way it occludes as much as it reveals? Did they argue about the progress of yet another double portrait, those great canvasses with tiny, faceless figures representing the artists themselves, slumped lonely and far apart in the shadowy corners of the frame? Did they live apart long enough to justify Music’s grand pronouncements about solitude and silence?

The couple owned studios and apartments in Venice and Paris. Judging from the photographs on show, the Venice studios would not look out of place in a Hollywood film. (The gallery attendant and I compare notes on how green our jealousy.) The handsome couple appear alternately in evening dress and louche dressing gowns. But I welcome this new insight into Music’s life: my previous encounters with his work had been informed solely by my knowledge of his internment in Dachau in 1944-45. (A book on Rembrandt’s etchings, borrowed by Music from the library at Dachau and never returned, is on display.) Many of Music's paintings, such as We are not the last, continued to testify to his experience of the Holocaust. Yet his marriage to Barbarigo indicates another dimension to his life and painting in the years after 1945. Displayed beneath the portrait he painted of Ida soon after they had met, his words on painting are celebratory, if a little nihilistic: 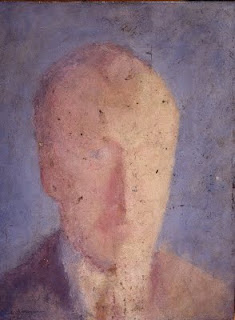 Posted by NANCY CAMPBELL at 00:20 No comments: 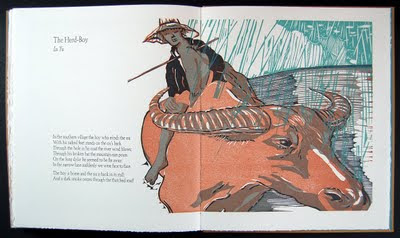 The poem above, by Lu Yu (in a translation by Arthur Waley) is paired with a woodblock print by Ralph Kiggell. The page spread is from Leading the Cranes Home, a selection of Chinese poems published by The Old Stile Press.
Kiggell, a British artist based in Bangkok, studied traditional woodblock printing in Japan. While working respectfully within this traditional process, he has a thoroughly contemporary vision - exemplified in a recent series of prints depicting pylons and water towers. Perhaps the 'mountain rain' that pours through the hat of the ox-minding boy in the image above was an omen, for Kiggell's next venture with The Old Stile Press, The Third Thing, will be an anthology of poems about water. (The title is drawn from a poem by D.H. Lawrence.) Kiggell is well qualified for such a subject, having recently completed a remarkable swimming pool mural in Hong Kong. One of the older poems in the volume will be an Anglo-Saxon riddle from The Exeter Book, in my translation. I'm looking forward to seeing how Kiggell responds to the equivocal words through wood and ink.
Posted by NANCY CAMPBELL at 12:24 No comments:

An Arctic Evening in Cambridge 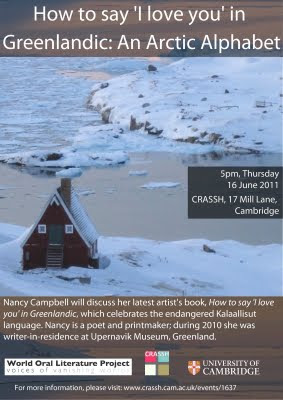 Posted by NANCY CAMPBELL at 12:20 No comments:

Email ThisBlogThis!Share to TwitterShare to FacebookShare to Pinterest
Labels: How to say 'I love you' in Greenlandic, World Oral Literature Project
Newer Posts Older Posts Home
Subscribe to: Posts (Atom)