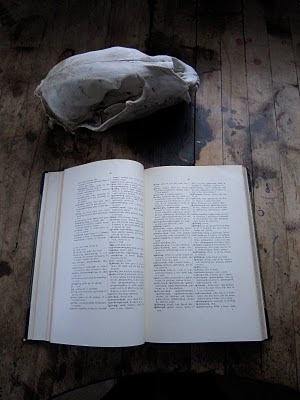 A clause in my contract reads 'Visual artists must leave a work behind in the Museum but writers are not required to do so.'

It's liberating to be excused from producing any work during this residency. However, it seems strange that I should be exempted on account of working with language, when Greenlandic has proved such a rich resource to me. (As well as poems suggested by its rich vocabulary, an 'ABD' artist's book is now in the works and a word-a-day short story is being aired on Facebook.)

So I decided that I would break my contract. Following those who believe that we should leave nothing behind but our footsteps, I'm leaving a linguistic trace. I have excised a word from my own language, which I will never be able to use again. I aired it for the last time to an iceberg this morning, and the iceberg shone impassively on, with the glorious contempt for all languages common to its kind.

Fearing the iceberg was not the best custodian, I slipped a small manifestation of my loss between the pages of the old Greenlandic Dictionary in the Museum. I suspect it will remain unread for years. Many Greenlandic words (particularly those associated with Christianity and modern life) are loan words from Danish, and so it is a language that is used to welcoming newcomers.

And what word did I chose? Well, of course, I can't say. It's a small word upon which the future depends. As it's already been done to death by one poet, I don't think I'll suffer by its absence - although I may have to learn to bite my tongue.
Posted by NANCY CAMPBELL at 15:09 4 comments: 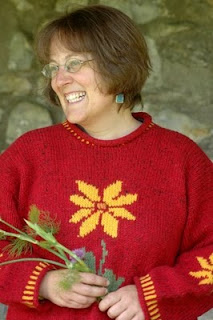 The Welsh poet Susan Richardson is the latest to be featured in London/Nuuk, a blog which charts creative responses to the Polar regions.
Richardson has travelled through almost every country with Arctic territories, which puts me to shame for my sedentary days in a log cabin. You can read her evocative descriptions of the landscapes and a wonderful poem sequence about the early medieval traveller Gudrid the Rare here.
Posted by NANCY CAMPBELL at 14:16 No comments:

Where in the world 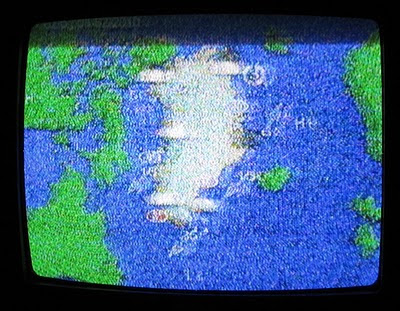 At the museum, Beathe is processing applications for the 2012 residency. She's received bewildered enquiries. How do I travel to Upernavik? Should I fly to Iceland or Norway first? This bemusement is understandable. On Google Earth the museum appears to be floating in the middle of Baffin Bay, and the truth is not far off. Very few travel websites make allowance for Greenland in their search engines, let alone this small northern community.

To appease Beathe's frustration we concoct some fantastical replies, describing air routes from Europe via Sydney and Moscow, or journeys which entail taking a flight to Toronto but parachuting from the plane over Greenland. The truth of the matter - a three-day, five-flight ordeal in increasingly perilous craft - might appear equally implausible to most sensible travellers.

One person's north is someone else's south, and to Beathe, who has no desire to travel beyond Upernavik, Thule is still 'Ultime Thule' but also Qannaq, the nearest town up the coast. We may be sitting in the most northern museum in the world, but we are at the centre of our own universe, with a horizon of 360 degrees. I find it as hard to justify to Beathe the cultural and practical reasons for Europeans' confusion, as to pinpoint my own emotions at being so far beyond everything I know, yet still behaving in a relatively rational manner, drinking coffee and doodling. The exotic seems strangest in proximity to normality. 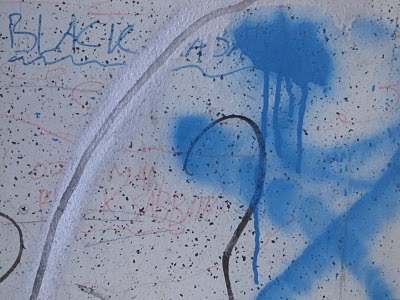 The Arctic carries an exaggerated sense of the exotic, since it has been represented in explorers' narratives from antiquity until the present as the ends of the earth. I try not to fall into this trap, but on my journey here, my amazement completely outweighed my terror as 'twin otter' planes flew low over vast tracts of uninhabited whiteness. I arrived in smaller and smaller airports, the names of the town cut with a jigsaw out of plywood and painted in bright colours. The times, and sometimes the days, of the flights were uncertain, and often I felt as powerless as a toy traveller in the bedroom of a child who had abandoned his games and gone to tea.

I found myself writing sonnets about the foibles of geography. For this uncertainty is expressed not only in the emotions of travellers, but also in the choices earth scientists have to make. There are ongoing debates about where to draw the southern boundary to the Arctic Circle (and whether it should be a real 'circle' of latitude or a wiggly line). Inevitably these have become even more complex as the climate changes. Also, there are several Poles in the Arctic, including the Geomagnetic North Pole and the Pole of Inaccessiblity (now obsolete). The North Pole was decided on as the 'proper' Pole, but even so it is not fixed. It wafts about the Arctic region through a variable known as the Chandler Circle. I'm quite that relieved finding it was not in my itinerary. 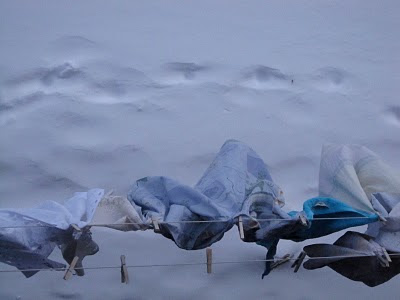 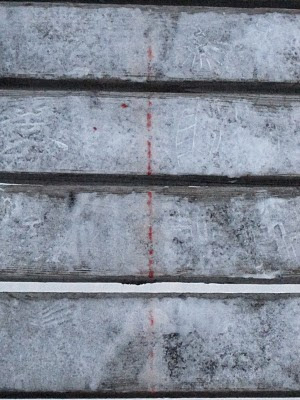 Upernavik reminds me of another island, which I lived on a decade ago, Lindisfarne in Northumberland. Lindisfarne was one of the earliest Christian communities in Britain, famous for its sanctity and the production of exquisite devotional objects such as the Lindisfarne Gospels and mead. It could not have been more unholy while I was there, but all islands draw lost souls eventually. I was working as a barmaid - perhaps had I been polishing the church brass I would have seen life from a better angle.

Upernavik has nothing like Lindisfarne's claims to sanctity - quite the opposite. I read in the history books that it was the last place in Greenland where the population could be persuaded into baptism. The last heathen soul was saved in 1864, and even afterwards, it is recorded that Christianity was pursued in a desultory manner while belief in the shaman and pantheistic spirits persisted. Finally, the catechist tried to exert his authority by burning all the drums on the island, as these were used in shamanic trances to summon spirits.

The relationship between the fifth-century Brendan, abbot of Clonfert in Galway, and the church in Rome was not quite so critical. Nevertheless, faced with pressure to bring his spiritual practice into line with Christian orthodoxy, Brendan rowed off into the "desert of the ocean" in a wicker carraugh to find a freer contemplative space. An epic account of his seven-year journey exists, an ecstatic work describing incredible spiritual and natural wonders. Brendan was a beguiling traveller who appeared to lack any sense of fear in the Arctic waters. When he encountered an iceberg so huge that it could been seen for three days before he reached it, he decided to row though a tiny hole in it, which in the evening light appeared to be "like the eye of God."

Strangely, even with these two noble religious traditions before me on the island, it is not shamanism or Christianity I turn to in order to make sense of this small place on the edge of the physical world. I'm impelled by the brightness and closeness of the constellations to reread the Greek myths. I find particular resonance in the figure of blind Orion, who appears in November, the season of pomegranates and sea storms, the hunter who walks on water. But that's another story...
Posted by NANCY CAMPBELL at 13:58 No comments: