Ending the year in Binsey 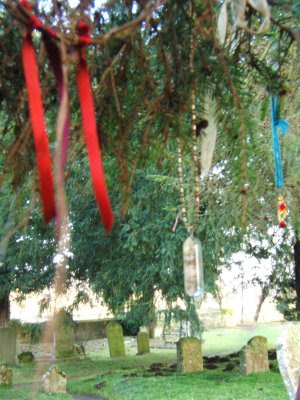 Today a walk in watery sunlight to St Fridewide's well in Binsey. The well, known for its healing powers, has been glorified. Someone has hung ribbons from the surrounding yew trees with strings of white plastic doves, miniature glass panels with holy images, and spruce cones. It looks a bit like Cornelia Parker's Shed. Since 'treacle' originally referred to an antidote against venom (from Greek theriake), the well surely sparked the Dormouse's improbable story in Alice in Wonderland:

'Once upon a time there were three little sisters,' the Dormouse began in a great hurry; 'and their names were Elsie, Lacie, and Tillie; and they lived at the bottom of a well—'

'What did they live on?' said Alice, who always took a great interest in questions of eating and drinking.

'They lived on treacle,' said the Dormouse, after thinking a minute or two.

'They couldn't have done that, you know,' Alice gently remarked; 'they'd have been ill.'

Alice tried to fancy to herself what such an extraordinary ways of living would be like, but it puzzled her too much, so she went on: 'But why did they live at the bottom of a well?'

....The Dormouse again took a minute or two to think about it, and then said, 'It was a treacle-well.'

'There's no such thing!' Alice was beginning very angrily, but the Hatter and the March Hare went 'Sh! sh!' and the Dormouse sulkily remarked, 'If you can't be civil, you'd better finish the story for yourself.'

'No, please go on!' Alice said very humbly; 'I won't interrupt again. I dare say there may be one.'

'One, indeed!' said the Dormouse indignantly.

Frideswide was an Anglo-Saxon princess, betrothed to the Mercian King Algar. She fled from him and he, pursuing, was struck blind. In her compassion she prayed for the restoration of his vision, curing him with water from the Binsey well. Frideswide dedicated the well to St Margaret of Antioch, who was also a model of chastity. 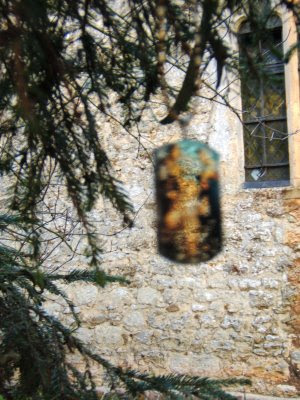 Posted by NANCY CAMPBELL at 14:06 No comments: 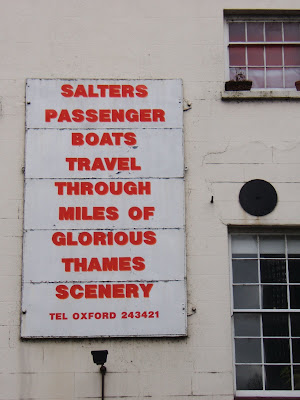 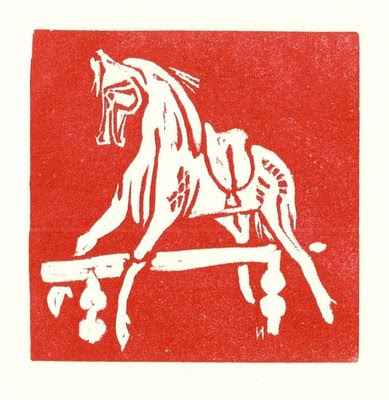 Posted by NANCY CAMPBELL at 16:36 No comments:

Ornan Rotem is a designer. He's responsible for the fabulous cahiers series run in conjuction with the American University in Paris. We met a few months ago for tea in Amato's - the best patisserie on Old Compton Street. Magical things happen there.

'Nancy!' he declared, wolfing Amato's airy chocolate mousse, 'I am going to start a poetry series and you will be its editor.'

The series has taken shape during long phone conversations while Ornan was at the printers easing other books off the press. Issued in sets of three, the slim, colourful volumes will offer contemporary translation, fiction, poetry, aphorisms... 'The books will be like the dots in an ellipsis,' Ornan remarked, deciding on the name - 'three dots, a beginning continued ... so small that it is nearly an ... omission.'

A few weeks later we met in the cafe at Foyle's on the Charing Cross Road. I sampled the more-ish vegan walnut and orange loaf. Looking over designs, we decided on a sewn structure rather than a common glue binding. The silky bible paper will have an oriental fold, so that each page is two sheets thick. The type is Ornan's beloved Dante. The slim books will be delicate but the general feel is far from light - the aim is to suggest something precious, worthy of care and consideration.

The writers have been selected for the first set of the series. The forthcoming list includes the aphorisms of the Hebrew writer Rachel Shihor, flash fiction sharp as a knife from Frances Gapper and wonderful poems by Ruth Valentine.
Posted by NANCY CAMPBELL at 17:14 No comments: Yesterday I travelled to Purley to interview my old colleague from the antiquarian booktrade, Peter T. Scott, about his bookmark collection. Peter has collected bookmarks for over forty years, obeying the shop injunction to remove ephemera from incoming volumes. He has found army badges, a plethora of bus tickets, and even a rasher of bacon between the pages! While conducting the interview I found myself gazing down the barrel of a Vickers machine gun in Peter's den; bookmarks are not his only passion.

Book Marks: Infiltrating the Library System, is an ongoing, annual international distribution of bookmarks made by book artists, curated by the Centre for Fine Print Research at the University of the West of England. The aim is to get more people to appreciate work in the format of the artist's book.

The bookmarks in past series have been made from a variety of media: old library cards, recycled embroidery, papers, photography, digital print, screenprint, laser-cutting, photocopied, folded, cut and sewn. The bookmarks are collated into sets and sent to participating galleries, bookstores and libraries for free distribution.

My contribution will feature quotes from the interview, which will be available as a podcast for the duration of the project. Below, a taster from Peter's collection. 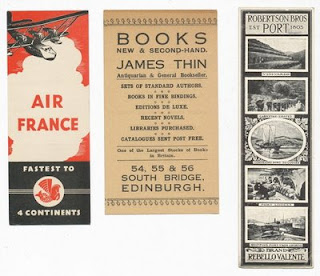 Posted by NANCY CAMPBELL at 11:54 No comments:

This lunchtime I was trying to maintain a sense of decorum while wearing a pink tissue paper crown, scoffing my first Christmas dinner of the season in the canteen of the RCA. Five stars for the roast potatoes, but none for the Christmas pudding - its suspiciously gelatinous sauce tasted more of lighter fluid than Courvoisier.

The dinner was offered by a group of Communication Art & Design students, who had asked me to give a talk on Book Arts. I took along a swag bag of samples as usual - I'm always interested to see which book will raise most interest for a group. In this case it was Roni Gross' beautiful Hallowe'en keepsake, with its multiple fold-out pages and scattered typography. 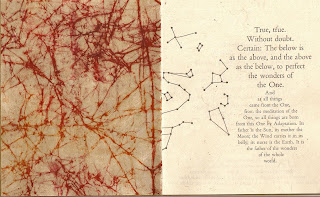 It was a good change to see some of the current show, too, including the uncanny work of the illustrator Zoe Taylor. 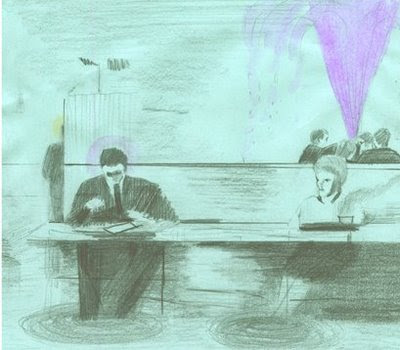 Posted by NANCY CAMPBELL at 11:38 No comments: 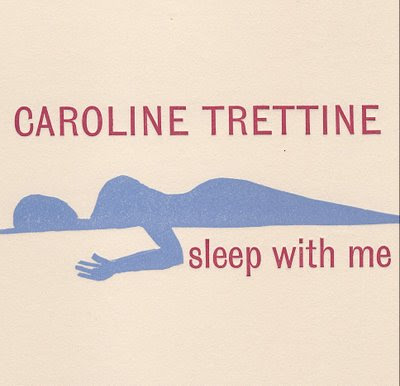 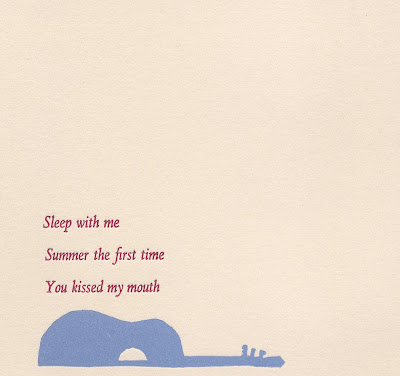 Sleep with me, a new cd single by the singer-songwriter Caroline Trettine, is now available. Each copy of this limited impression comes in a beautiful hand-made case, which I designed and printed earlier this year.

Copies are available from the singer.
Posted by NANCY CAMPBELL at 11:19 1 comment: