Next week I'll be in Dundee, origin and last resting place of the Discovery, the ship on which Robert Falcon Scott and his companions sailed for their ill-fated Antarctic expedition.

But I will be talking about printing at the other end of the earth... I'm due to present a paper at IMPACT 8, the biennial print conference that this time around will take as its theme 'Borders & Crossings: The Artist As Explorer'. How could I resist?

Here's the abstract for my paper, for those of you who can't make the conference.

And if the sun had not erased the tracks upon the ice,
they would tell us of the polar bears and the men who caught them.
(Obituary of a great Inuit hunter, 19th Century)

In 2010 Nancy Campbell travelled to the most northern museum in the world – Upernavik Museum in Greenland. Her residency resulted in an extensive body of graphic work on the vanishing languages and landscapes of the Arctic, including three limited-edition artists’ books: How To Say ‘I Love You’ In Greenlandic (Bird Editions) and The Night Hunter and Tikilluarit (Z’roah Press).

Historically the Inuit ‘read’ tracks on the ice rather than marks on paper. But Arctic explorers brought a new form of communication – the book – to Greenland’s shores. Nancy will briefly trace the history of the printing press in Greenland since its introduction in the late eighteenth century, addressing the difficulty of printing in remote and extreme conditions, the problems of representing new languages using old alphabets, and the reception of early printed material by the indigenous population.

Is there any possible dialogue between the printmaker, with her desire for permanent marks on paper, and the historical hunter, with his reverence for temporal tracks upon the ice? Nancy will discuss the challenges of using different print processes (letterpress, pochoir, screen print) to respond to an oral culture that has traditionally seen print media as part of an unwelcome colonial heritage. She will demonstrate how the disappearing Arctic environment informed the design choices behind How To Say ‘I Love You’ In Greenlandic and The Night Hunter, and how the print processes and the form of these books address issues of environmental and cultural extinction.

Email ThisBlogThis!Share to TwitterShare to FacebookShare to Pinterest
Labels: Arctic, Artists' Books, How To Say ‘I Love You’ in Greenlandic, Impact, Printmaking, Scotland 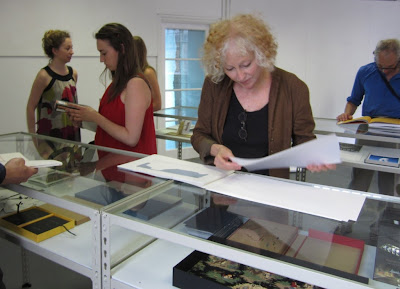 How To Say 'I Love You' In Greenlandic: An Arctic Alphabet was selected by an international jury for representation by KALEID 2013 LONDON. The book was one of 50 ‘best artists’ books’ exhibited at the launch event at the Art Academy in July (pictured). I am delighted to announce that it will go on to be one of the 15 titles represented by KALEID EDITIONS at The London Art Book Fair at the Whitechapel Gallery on 13-15 September 2013. 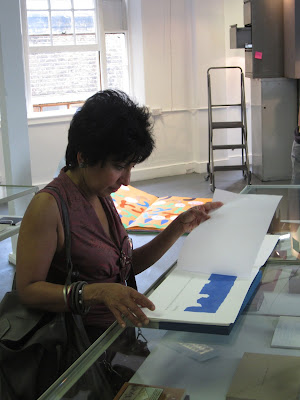 Email ThisBlogThis!Share to TwitterShare to FacebookShare to Pinterest
Labels: exhibitions, How To Say ‘I Love You’ in Greenlandic, KALEID
Newer Posts Older Posts Home
Subscribe to: Posts (Atom)