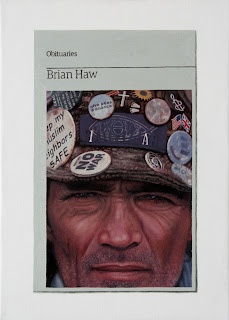 The London Art Fair offered predictable delights this year: yet more Ben Nicholson etchings! And did Roger Hilton really paint so many gouaches? One welcome oddity was Bloomsbury Auctions' recreation of the recently deceased Craigie Aitchison's studio in the VIP lounge, designed to promote their sale of his effects on 26th January. (Apparently a success - I see that Lot 20, A Selection of Bedlington Terrier Objects, upper estimate of £120, sold for £700. But will there be tax on terriers?)

On my way to the exit, I turned a corner and found myself staring into the scrunched up eyes of Brian Haw. My first thought was that veteran peace protestor Haw was an unlikely person to encounter at the Business Design Centre in Islington. He was especially unlikely to be there, having died last June.

I hadn't been aware of his death, but the fact that the image appeared to be clipped from The Guardian's Obituary column soon brought me up to speed. However, this was no clipping but a meticulous oil painting by Hugh Mendes.

Mendes's ingenious approach to portraiture is to paint a likeness of the obituary rather than the living individual. These paintings are, like death masks, strangely close to daily experience and deceptively tactile. They are exquisite still lifes: both a representation of the newspaper clipping itself and the equivalent of the skull in a vanitas. One can't help recalling the Cubists' representation of newspapers in still life paintings such as 'Newspaper and Fruit Dish' by Juan Gris, or their use of newspaper as a medium in works such as Picasso's 'Bottle and Wine Glass on a Table'. But Mendes offers very modern perspective - the newspaper is the whole subject matter here, seen face-on (as if on a computer screen) rather than laid among other objects on a cafe table. 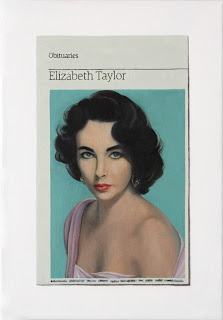 Mendes's celebrity portraits capture the quantum character of the media. These paintings, each with its 'Obituary' caption, do not ask us to suspend our disbelief and imagine the sitter back into life, as portrait painters have traditionally done. Yet 'Elizabeth Taylor', for example, does not only present the actor in death, at the moment the obituary notice appeared. She persists as a youthful beauty in the photograph which the editor has chosen to memorialise her life. Mendes's paintings invite us to consider the role chance plays in iconography. Which photograph, we might wonder, will represent us after our death? Do we feel a shiver as the shutter is snapped? 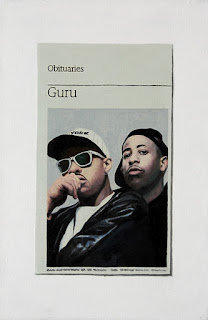 Obituaries by Hugh Mendes runs at Charlie Smith London Ltd from Friday 24 February – Saturday 31 March  2012. One exhibition to see before you die.
Posted by NANCY CAMPBELL at 15:10 2 comments: