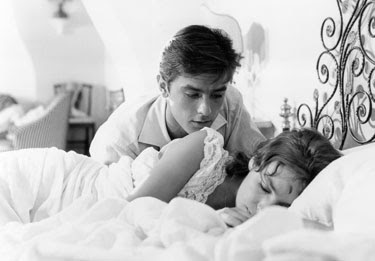 Sarah Bodman, senior research fellow at the Centre for Fine Print Research in Bristol, has invited me to collaborate on a book for the project Poetry Beyond Text: Vision, Text and Cognition, which is commissioning new work as part of an exploration into how readers respond to visual aspects of poetry.

Sarah has long been an aficionado of Patricia Highsmith's Ripley quartet, which takes 'the talented Mr Ripley' from being a small time fraudster in New York to millionaire murderer in the beauty spots of Europe. Sarah is intrigued by the meals Ripley consumes, which are documented in detail by Highsmith as a sign of his growing sophistication. Ripley's victims stand in the ways of his appetite for the good life, epitomised by chicken in aspic, celeri remoulade and sole veronique.

My texts, variations on Highsmith's work, will accompany Sarah's photos in a limited edition artist's book. Meanwhile, we will generate some new responses to the novel by 'curating' a dinner party at which all the meals and liqueurs mentioned in the book will be served.
Posted by NANCY CAMPBELL at 07:57 2 comments: 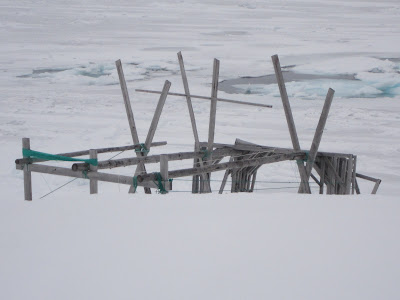 As I walked on Hampstead Heath this evening, listening to church bells pealing across London, I tried to understand the character of this temperate zone. Here joy comes, not from surviving a struggle, but from delight in subtler aspects of experience. The weather is patient. You can walk on the land. You can't walk on the water. The rivers aren't covered with icy skins. But the people are. Even so, every conversation can be understood, and this obligatory eavesdropping is a form of torture.

Although England has had a harsh winter, spring has arrived. The earth is bursting with baroque decoration. Haphazard living things distract the eye: people; trees; birdsong. Branches scribble confusing syllabics over the skyline. Blackthorn blossom and glistening horse chestnut buds blackmail the viewer into admiration. It is disgustingly beautiful, impossibly transient. Having seen the desperate state of the environment in the Arctic, it's clear to me that we have little time left to enjoy this balmy and benevolent climate. 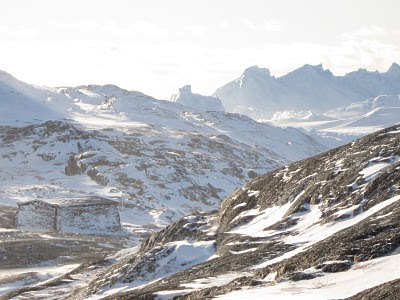 I'm haunted by my experiences after leaving Upernavik Museum. I travelled down the coast to Ilulissat, where I'd arranged to stay with a hunter, Ole, and his family, in order to gain a better understanding of their way of life. Ole has built a turf hut where the Sermeq Kujalleq glacier calves into the sea (above). Here I heard stories of the effects of climate change that were more gruesome than any Inuit legend. Sermeq Kujalleq has been appointed a UNESCO world heritage site, but it seems futile to draw boundaries around beauty spots, which no pollutant respects.

Climate change is causing great economic hardship among the people in Greenland. As the ice diminishes, small communities are trapped without food or clothing. Hunters must shoot and eat their dogs as they cannot afford to feed either the dogs or themselves. The dogs that survive grow dangerous with cabin fever. Women are advised not to breast-feed their children, as the toxins in the sea pass from any fish or seal that they consume into their milk.


In the evenings I sat by the fire and drank tea brewed from heathery twigs collected from the hillsides in the summer, tea that smelt of mint and thyme. We talked about what the ice might do tomorrow, and joked at each other's expense, and exchanged new words in our different languages. Yet beneath the redoubtable Greenlandic sense of humour there was no evading the tragedy of this situation, the slow implosion of a culture. Ole told deprecating stories, which emphasised how his life differed from that of his ancestors. One of his most persistent complaints was the loss of freedom: the freedom to follow a traditional way of life, to earn a decent livelihood. This freedom, or 'liberty' as it is called in Article 3 of The Universal Declaration of Human Rights, has been insidiously eaten into as a consequence of European lifestyles. Our culpability, and our responsibility for change, has not gone unnoticed. One night, Ole threw his hands up and said to me: 'You must tell the people they must plant trees, and then the ice will not melt, and then there will be fish and seals and polar bears as before and we can live as we only know how to do.' I felt impossibly overwhelmed. As if I could reverse all the deeply engrained habits of humanity ... or even overcome my own giddy greed for the subtle delights of spring.
Posted by NANCY CAMPBELL at 07:43 No comments: