Many of the bookmarks I’ve seen during my research on the topic for the University of the West of England's Bookmarks VII project date from the beginning of the twentieth century – they were produced using letterpress and type-high blocks. I decided to return to letterpress for my own design, and visited the Old Stile Press, where I printed the bookmarks on the Albion hand press from polymer plates. Nicolas McDowall snapped the following photos during one of my dawn stints on the press. 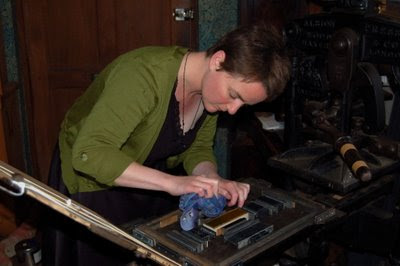 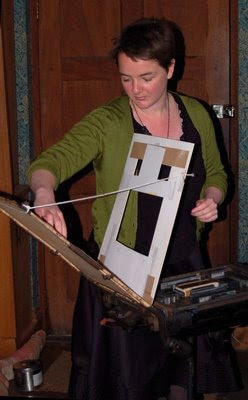 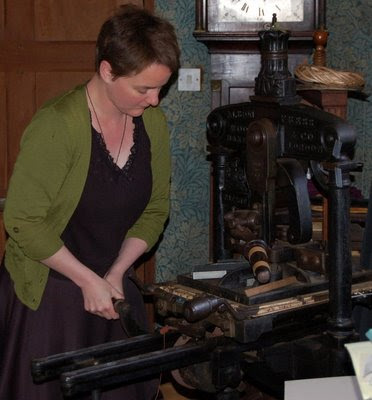 Posted by NANCY CAMPBELL at 13:15 No comments:

It's nice to have a poet as a landlord. This morning I found a note outside my room after I had been waiting to use the washing machine.

Email ThisBlogThis!Share to TwitterShare to FacebookShare to Pinterest
Labels: Poetry

‘I wanted to show the world that art is everywhere’

There is no other colour that will give you the feeling of totality. … Of peace … Of excitement … I have seen things that were transformed into black that just took on greatness.

So said Louise Nevelson, arch-haunter of East Side skips. Nevelson transformed herself into a black-clad Manhattan artist and took on greatness, becoming one of the most brilliant Abstract Expressionist sculptors. Nevelson’s post-Cubist ‘paintings in space’ were inspired by Picasso's early guitar sculpture, using oddments to create imposing monoliths. Not all her work is black, but she had a notable taste for monochrome.

A retrospective of Nevelson’s work is being shown at the Louise Blouin Foundation. I was particularly impressed by the huge work End of Day Nightscape (1973) in which 27 typecases laid end to end are filled with an assortment of bobbins, brushes and junk.

I've planned a series of children’s art workshops based around the show, and last weekend I was presumptious enough to suggest that we could make our own Nevelson sculpture. 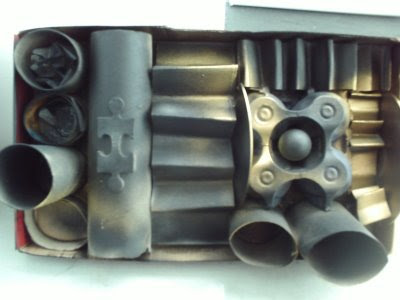 Like Nevelson, the children used materials which had been discarded, but they worked on a slightly smaller scale. They made frames from old showboxes and filled them with cylinders (loo rolls), squares (plant pots) and accordion structures made from folded cereal boxes. The results were dynamic (and messy), but no one expected the transformation that occurred when I got out my spray can. PVA splashes and colourful commercial graphics were obliterated in mysterious black and gold. Later, Mairead O’Rourke, the education officer, organised a show of work in the gallery. 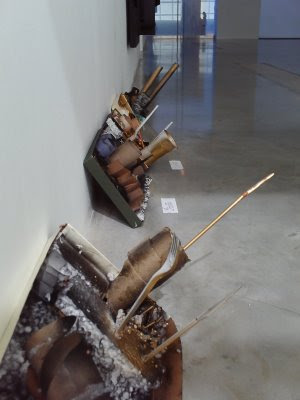 ‘The work that I do is not the matter and it isn’t the colour,’ Nevelson said. ‘It adds up to the in-between place, between the material I use and the manifestation afterwards; the dawns and the dusks, the places between the land and the sea. The place of in-between means that all of this that I use – and you can put a label on it like ‘black’ – is something I’m using to say something else.’
Posted by NANCY CAMPBELL at 12:12 No comments: