Snow is a fascinating subject for a writer. A child's plaything, a scientist's study and (as the January storm showed us) a force capable of turning urban lives upside-down. Looking back through my poems, I’m surprised to see how many times themes of snow and ice emerge. There's an old poem, ‘Remembering Snow’, telling of a sudden spring storm in Massachusetts, and recently a ‘Winter Villanelle’ describing a tense night walk down an icy road. There's even a long narrative about the unfortunate Captain Oates, written long before I realised that I would be going to the Pole too.

But what if my powers of description fail me when faced with the immense glacial landscapes of Greenland? How can the English vocabulary, forged to suit a slight winter chill, possibly do the job? I’ve heard elusive rumours about the number of Eskimo words for snow. In the Inuktun dictionary of the northern Greenlandic dialect, the words for ice include kaniq, qirihuq, qirititat, nilak, nilak, nilaktaqtuq, hiku, hiquaq, hikuaqtuaq, hikurhuit, hikuqihuq, hikuliaq, maniraq, hikup hinaa, qainnguq, manillat, kassut, iluliaq, ilulissirhuq, auktuq, quihaq, hirmiijaut. Rime frost, freshwater ice, sea ice, thin ice, ice on the inside of the tent, pack ice, new ice, a smooth expanse of ice, the ice edge, solid ice attached to the shore, hummocky ice, pressure ridges, pieces of floating ice, icebergs in the water, melting ice…

As Gretel Erlich points out in her remarkable memoir This Cold Heaven, about her life among the Inuit hunters, highly specific language is needed when identifying ice or snow. When you are travelling over ice sheets at speed in a sled, the type of ice means the difference between life and death – skimming and sinking. The ice is your runway, your drink, the shelter where you build an igloo when it’s time to sleep. It is even the temporary record of your travels, as Erlich notes when describing a trip on a hunter's sled: "The Inuit people never had a written language. Now the whip, trailing behind the sled, made marks in the snow that looked calligraphic in the loose running style the Chinese call ‘grass script’." Will the ice be only a temporary trace of my travels, or will I record it? One thing is sure, a poet has to survive by language, just as the hunter does.

Thanks to Clare Carter, who was inspired by a residency at Upernavik, for the photo.
Posted by NANCY CAMPBELL at 11:37 2 comments: 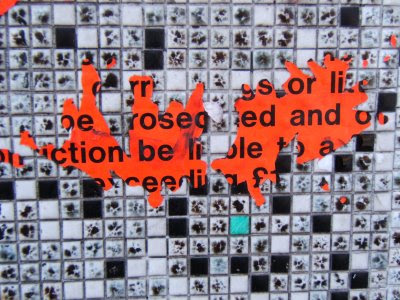 A Hackney crossword
Posted by NANCY CAMPBELL at 15:33 No comments:

Then and Now: new work by Lynne Avadenka

Lynne Avadenka, hot back from her success exhibiting at an invitational at the Contemporary Jewish Museum in San Francisco, has a show of recent work opening at the Lemberg Gallery in Michigan this weekend.

For those not within easy reach of Detroit, here are some images of the show, together with my short essay, commissioned for the exhibition. 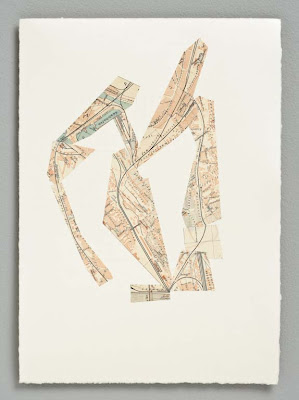 Lynne Avadenka's work echoes with remembered voices. Anonymous texts and found printed matter reveal multiple histories. Her prints and bookworks confirm John Donne's belief that 'No man is an island entire of itself; every man is a piece of the continent, a part of the main; if a clod be washed away by the sea, Europe is the less, as well as if a promontory were...’ Then and Now was created in two continents. Avadenka begun the works during a recent artist’s residency in Germany, and later pursued the ideas in her Michigan studio. In her hands, long iridescent sheets of paper from Japanese mills act as the landing strips for relief impressions. She guides the viewer into a mirror-world of dreams, where familiar landscapes are reversed.

Architecture is a humane practise, concerned not just with space but also the people who inhabit it. Gaston Bachelard, in The Poetics of Space, describes how ‘the houses that were lost forever continue to live on in us.’ Avadenka patiently disciplines the arcane mechanics of the printing press to create whole cities. She envisions buildings in small letters of lead, in rough-grained plywood, laying one muted tone on another. The resulting structures are universal: they suggest the level roofs and domes of the Middle East, the summits of city skyscrapers or the concrete units of a Midwest mall. They could be homes or prisons, empty or full of mourners. Interlocking orbits are printed over the rigid geometry of buildings in carbon and carmine, the colours of ash and blood. Restless, yet arrested in time, these irrepressible spheres spin like transcendent Sufis.

Avadenka works like an enzyme, acting on existing materials to transform them. She cuts up antique maps and re-aligns tracks into impossible journeys. She dissects a ship’s log, and collages its blank charts into abstract narratives. A Hebrew grammar and a German dictionary are spliced together; in highlighting some words, others are erased. Temporal and linguistic systems of order are broken down and reformed into new beauty.

Avadenka has named one series of prints Formenlehre, which translates as morphology, the study of both living organisms and the words which represent them. For her, language and existence are inseparable. However, far from being signifiers, many of the words in this exhibition are erased or illegible. Irrespective of border and convention, letterforms run to the very edge of the paper. Cacophonies of overprinting result in solid areas of text. Like a black box in the heart of the machine, this concealed text seems to generate secret meanings within itself, awaiting interpreters. These letters represent both every language and none; the voices of all speakers and the silenced.
Posted by NANCY CAMPBELL at 12:24 No comments: