Ann Muir: 'Ebru by the sheet'

Ann Muir was a skilled craftswoman whose marbled papers gained her an international reputation. Ann, who died last month, worked for many years from her studio at St Algar’s Yard, in Frome, Somerset.

Ann's skill in reproducing historical designs and patterns was remarkable. In cases of sympathetic repair work or rebinding, Ann was able to receive a scrap of old paper through the post and return it with two or more full sheets in the same style and colourways, often within a couple of weeks.

As Ann's reputation grew, opportunities for a more imaginative use of her talent flourished; she was increasingly commissioned by fine press printers to design paper for specific titles, each one reflecting a book's theme.

Graham Moss of Incline Press, who spoke about Ann’s work at her funeral at St Michael's, Mere, Wiltshire, on July 30th, described her papers as being ‘ebru by the sheet’ - illustrative, rather than purely decorative, material. 'Ebru is the epitome of marbling skill, pictures created on the surface of water with colours that you can't read until the image is transferred to paper, most usually of ornate and fantastical flowers. Ann expanded these ideas; flowers yes, along with ladybirds, snails and spiders with fantastic webs, even hedgehogs, trees, and amazing red and gold fish in underwater scenes. And as well as the expected size, she made miniature marvels of all these, drawn on the surface of water in an ice cube tray, on the table at home as fit for an evening's entertainment after a day at work.'

In Harvesting Colour: The Year in a Marbler’s Workshop, (Incline Press, 2000), Ann designed patterns to represent the months of the year. These were accompanied by her entertaining tales from St Algar’s Yard. Graham Moss recalled that Ann's 'mastery of tradition allowed her to go beyond the usual constraints, only possible because of her total control of that tradition.'

The bindings on many recent editions of fine press books will be a testament to Ann’s life and work. One satisfied customer, Edward Suzuki, wrote to Ann: "Are you a descendent of William Morris? You have the God's hands. Stunning design, fabulous colour, beautiful colour combination, eternal beauty, very sublime, beyond my poor English. Your joyous creation of beauty is forever."

An appreciation of Ann’s life and work by Barry McKay will appear in the next issue of Parenthesis, the Journal of the Fine Press Book Association

With many thanks to Graham Moss for allowing us to publish extracts from his eulogy, and to Book Patrol where this was originally posted.
Posted by NANCY CAMPBELL at 17:21 No comments:

I've just discovered the Koopman Collection in the Koninklijke Bibliotheek (The Netherlands National Library). A digital record of the collection has been launched, allowing the long distance reader to see the books online. Amongst current debate about how best to display valuable manuscripts and printed material online (let alone whether one should do so at all) this site is an exemplary lesson in How To Do It.

There's a poignant story behind the collection. Louis Koopman and Anny Antoine met in The Hague in the 1930s; a shared interest in French literature brought them closer together, and before long they fell in love. Both were collectors of first editions and fine illustrated books. Tragically, Anny was killed in a street accident before their wedding. For the remainder of his long life Louis assembled an impressive collection of artists' books in her memory.

The collection holds artists' books from 1890 to the present day: seminal works by Blaise Cendrars and Sonia Delaunay (including Prose du Transiberian), Picasso's illustrations to Les Chants des Morts and Matisse's Apollinaire, and contemporary masters of fine printing such as Francois da Ros and Michael Caine.

I'm particularly intigued by Valéry's Cahiers. This is one of the few works in the collection which is both written and illustrated by the same person. After a spiritual crisis, Valéry stopped writing poetry. Instead he began to keep a private journal, and over the course of fifty years, he filled 261 copybooks - approximately 30,000 pages. His first notebook was called Ship's Journal, a title which suggests the spiritual voyage on which he was about to embark.
Posted by NANCY CAMPBELL at 17:02 No comments:

Email ThisBlogThis!Share to TwitterShare to FacebookShare to Pinterest
Labels: Artists' Books, Child in a Sweet Shop, Koopman, The Hague, Typography 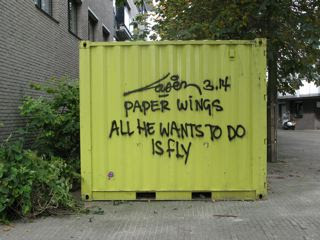 My friend Natasha Herman, bookbinder and lyricist, found this poem in Amsterdam.
Posted by NANCY CAMPBELL at 10:15 1 comment: 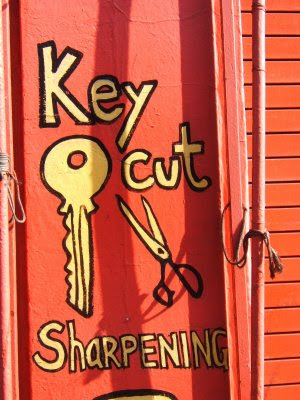 I've never really got into hardwear shops, the smell of steel wool sets my teeth on edge. However when I need to get keys cut, or find a power tool, or maybe even a plant pot, 13 amp fuse or a mousetrap, I go to: 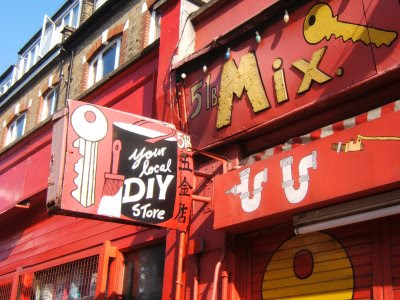 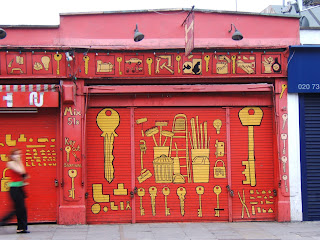 Down the hill and just beyond the T-Bird Bar lies one of the most sweetly named streets in London. This street always gives me pause for thought. Is it named after a local debutante called Vivian Comma? Is it longhand for 'Vivian, Close'? Why is Vivian Close? Could it be a warning - or an enticement - or both? 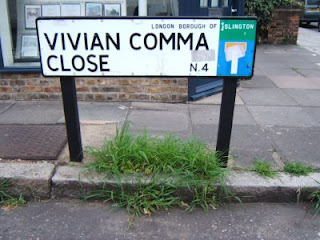 The elegant capitals of the local stationary store are also a lure. I have a fondness for establishments with serendipitous names, such as 'Reeves and Pain' (surely Wreaths and Pain?) the Funeral Directors in Oxford. But 'Fish and Cook' is appealing because the proprietors' names seem well-matched to each other - if not to the world of lead pencils and scotch tape.

As for the real cooks, you will find them at the Happening Bagel Bakery, round the corner, past the 'TAKE COURAGE' beer sign hanging on the pub, but that's another story...
Posted by NANCY CAMPBELL at 17:24 No comments: