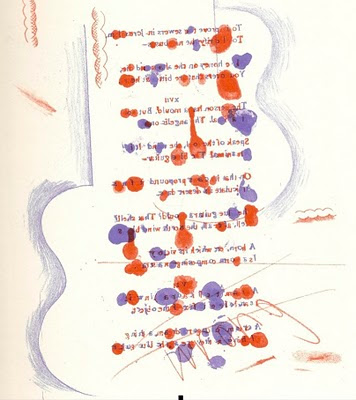 Wallace Stevens as seen by David Hockney
Thanks to all sixteen poets who came to the workshop on 'Poetry in Three Dimensions' - an introduction to book arts - at the Poetry School last weekend. We had some fascinating discussions about the relationship between poetry and design, and it was great to witness everyone's enthusiasm for getting stuck in and making their own books.
We looked at different presentations of Wallace Stevens' work by the artists David Hockney and Helga Kos. As a young man Hockney produced a print series in response to Stevens' long poem The Man with the Blue Guitar (itself inspired by a painting by Picasso); Stevens' late poems, set to music by Ned Rorem, feature in Kos' artist's book Ode to the Colossal Sun. Kos describes her three-volume work as 'a third, visual stratum to Stevens' poems and Rorem's music' and I've no doubt that in time this setting - which won the accolade of Best Dutch Book Design in 2004 - will be considered as iconic as Hockney's. 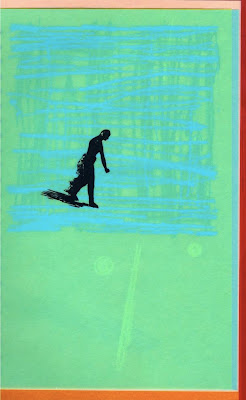 Wallace Stevens as seen by Helga Kos
The class drew inspiration from these artists' books to make three hand-bound volumes to present their own writing. As the binder Keith Smith writes:
'Bookbinding at its ultimate realisation is not a physical act of sewing or gluing, but a conceptual ordering of time and space. It is not sewing but structure of content that ties together the pages of a book. Binding must begin with the concept of text and/or pictures.'
You can see images of Anne Welsh's beautiful setting of her poem 'Arran Jumper' over at her blog Library Marginalia, and the photos below show work-in-progress on Elizabeth Bell's poem on the sea deity Sedna, and Zakia Carpenter's ingenious thread-typography. 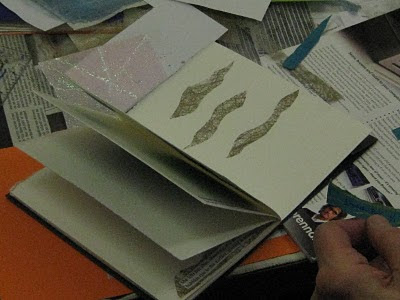 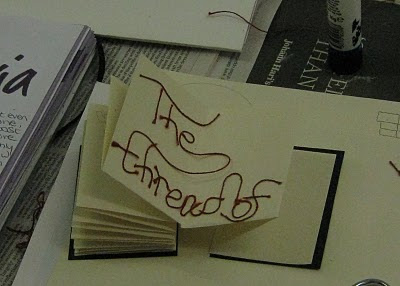 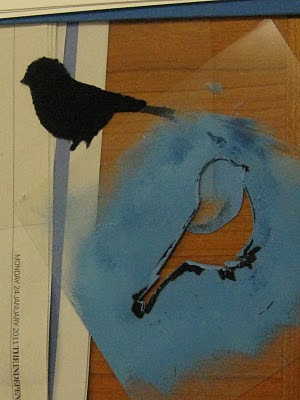 Pochoir stencilling
Posted by NANCY CAMPBELL at 14:16 No comments:

Reflections in a Field of Heaven 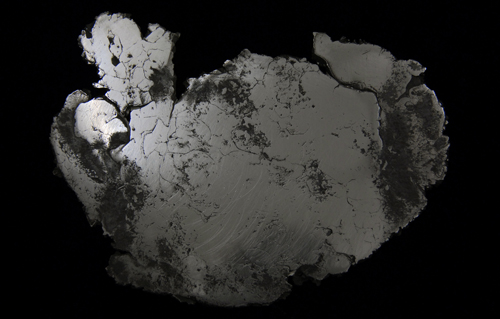 Email ThisBlogThis!Share to TwitterShare to FacebookShare to Pinterest
Labels: Poetry

There's been some controversy on the use of language in my 'Qavak Songs' published in Qarrtsiluni's 'Translation' issue last week, notably at the NCC Woman’s Poetry Listserv (WOMPO). As I wrote in response:

I’m glad there’s debate on the matter and I’d be interested to hear more opinions from both sides. I’m particularly proud of qarrtsiluni for publishing the songs, as I had expected publishers to shy away from the language and subject matter. Translation is about entering and respecting other, often unfamiliar, cultural spaces as much as linguistic exchange. Often the former is more of a challenge for us.

Of course, translation also has to work in the host culture, and I am sorry that these songs have offended any readers. Since some people doubt the wisdom of my linguistic choices, and others have asked for more information, here's a brief explanation the rationale behind them.
The three characters speaking in these songs are powerful shamanic figures. As one reader aptly put it, they possess ‘implacable strength’. The language is confident, not defensive. The songs are powerful incantations, which are used within the larger narratives from which these translations are drawn to emphasise the shaman's superiority to, and control of, the universe around her. The sexual and gender politics of the traditional Arctic societies in which these songs originated is very different to that in which I grew up in the UK at the end of the twentieth century. These women are speaking within a culture that does not shy from graphic physical reference, either with regard to the human or the animal body; nevertheless, as shamanic shape-shifters they can leave their bodies behind and exist on a purely spiritual level. What seems a contradiction is a strength.

My objective was that of most translators – to remain faithful to the original (you can read a little more about the demotic of the latter here). During the translation process, as so often when relating Greenlandic words in English, I realised the paucity of my own language.
The English words I chose to translate nalikkaataak and uvijera - 'cunt' and 'clit' - seemed to me, both in sound and sense, the most fitting for the task. I avoided any exotic words or terms deriving from metaphors, which I felt would introduce impurity into the diction. These songs are not intended to be sweet or easy on the ear. One reason these shamanic figures fascinate me is their irrepressible queering of so many gender stereotypes. I sought language that would contain a contemporary resonance of the shock that their actions provoked.
I am all too aware of the complex issues surrounding terminology for the female genitals. I do not believe any words are free of cultural baggage (including, alas, even those such as 'yoni' or 'pussy' which are preferred by some readers of WOMPO because they are currently deemed inoffensive). I do not deny that the words in these songs have been used, and are still used today, to shame and oppress women; I have been on the receiving end of such abuse. However I stand by my usage in this context. Language is not static, unless we refuse to play a part in its transformation.
Posted by NANCY CAMPBELL at 20:19 3 comments:

A selection of my translations of songs from the South Greenlandic Qavak dialect have just been published in the online journal qarrtsiluni (follow the link to read or listen).
All three songs, sung by female shamans, are from tales of great daring that have become legendary in Greenlandic culture. I discovered the original transcriptions of these versions in an obscure journal in Upernavik Museum; I believe this is the first time they have been made more widely available. The Song of a Wicked Woman whose Knowledge Knew No Limit is especially notable. Like Beowulf's sword or Achilles' shield, the arrow used by Qasapi to kill his enemy Unngortoq in the legend has a prominent role in all versions of the narrative, but no other account has identified the origin of the weapon, perhaps for reasons of delicacy, as the shaman's 'uvijera' (an obscure term which derives from the word for mussel, 'ulioq').
I've had some great feedback on them already, notably 'Aunt B' of Tennessee in the ravishing blog Tiny Cat Pants. Thanks also to Brooklyn's David Cooper and Jane Rice.
Posted by NANCY CAMPBELL at 20:40 2 comments: