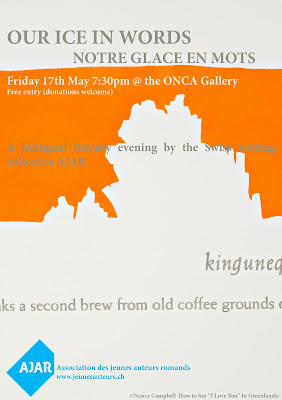 I'm delighted that the Swiss writing collective AJAR (Association des jeunes auteurs romands) will be performing written responses to my book How To Say 'I Love You' In Greenlandic in Brighton next month. In Notre Glace En Mots, a bilingual literary event at ONCA Gallery, eleven young authors read new poems inspired by Greenlandic words, share neologisms and tell stories about melting ice and Arctic colonialism. Full details can be found here.
Posted by NANCY CAMPBELL at 14:32 No comments:

Email ThisBlogThis!Share to TwitterShare to FacebookShare to Pinterest
Labels: Arctic, Brighton, Greenlandic, How To Say ‘I Love You’ in Greenlandic, ONCA, Poetry

The new issue of Stravaig, the Journal of the Scottish Centre for Geopoetics is out now, and available for download here. The issue, with the theme of Coast to Coast, includes some works written during my residency in Siglufjörður, Iceland.  There's also a riddle, which came about while I was translating another riddle from the Anglo-Saxon Exeter Book for an anthology of poems on the theme of water, The Third Thing, which is forthcoming from the Old Stile Press.

The image above, by Anthony Ratcliffe, accompanies a review of his exhibition Shoreline and Watershed by Roger Bygott.
Posted by NANCY CAMPBELL at 20:24 No comments: