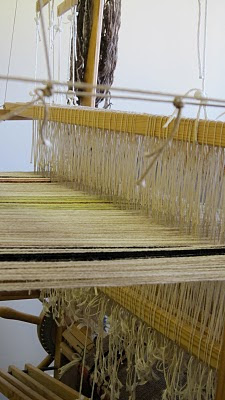 My father's wedding gift to my mother was a wooden floor loom, not unlike the Great Bed of Ware in its dimensions. The gift calls to mind another patient wife, Penelope, who in her husband's absence was instructed by her son Telemachus to "Go within the house and busy yourself with your daily duties, your loom, your distaff, and the ordering of your servants; for speech is man's matter."

I spent my childhood playing between wooden treadles, helping to thread heddles and wind wool around shuttle cones. It's no co-incidence that one of my mother's favourite poems is Yeats' romantic fabrication:

Had I the heavens' embroidered cloths,
Enwrought with golden and silver light,
The blue and the dim and the dark cloths
Of night and light and the half light,
I would spread the cloths under your feet...

Now, each time I hear my mother talk about her process – keeping the tension of each line consistent, the need for restraint in the use of colour – I'm reminded of the old but apt comparison of weaving and writing. 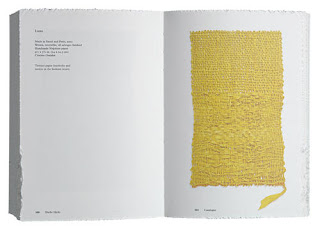 So I was intrigued to find that almost everyone I met in the Netherlands last week was discussing Irma Boom, the great Dutch book designer, whose work Weaving as Metaphor, a book about the weaver and artist Sheila Hicks, won the Leipzig Book Fair’s prestigious designation of the “most beautiful book in the world.” 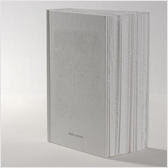 Boom's trademark tonal austerity is always enlivened by radical play on book structure: perforated slipcases, dovetailed fore-edges, distressed deckles. The design for Weaving as Metaphor is surprising yet inviting. A brick of a book, its pure white boards are subtley textured by a blind-embossed fabric motif, and the paper at the head is rough as a snipped selvedge. Inside, justified lines of type run bravely to the extreme edges of the page, as in well-woven cloth.

Sheila Hicks' work is very different to my mother's. Hicks approaches fabric like an existential argument; my mother was formerly a landscape painter, and weaving allows her to explore colour and line in the abstract. While a horizontal weft may suggest a landscape, it is one built up like geological strata, rather than rolling hills freely expressed with brushstrokes. Of course, the boustrophedon work of the shuttle also suggests the accumulation of lines of text, sewing a narrative in time rather than space, like an epic poem. 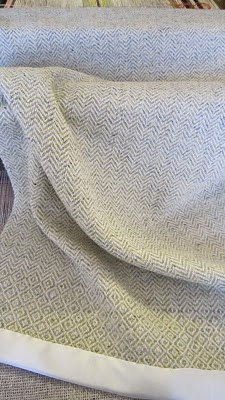 But the poetry in my mother's work is quietly spoken; two recent projects began in graveyards. The first draws on the landscape seen from the church in the hamlet of Milbourne, Northumberland, where my grandfather is buried: sheep fields bordered by cow-parsely and hawthorn, green spring grass tempered by dark yews. The last cloth to come off the loom was more equivocal, rust red and yellow, inspired by shepherds' gravestones at a small ruined chapel that we discovered last summer near Hermitage Castle in the Scottish Borders. I admire her bravery in evoking through wool alone these carved letter forms, eroded by weather and lichen, unravelling the stories on the stones.
Posted by NANCY CAMPBELL at 11:45