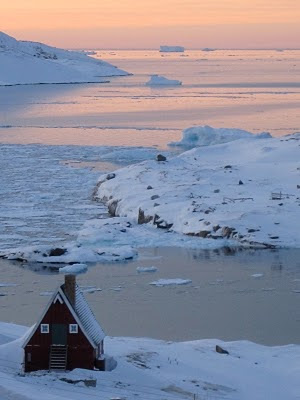 If you were sailing north, the first you would see of this island is the museum, its wooden walls painted blood red, on a promontory overlooking Baffin Bay. It can be difficult to spot, and some days it's completely under snow or obscured in mist.

The interior of the museum is also elusive. From England I found it hard to tell - from the website and a vague briefing - what the museum stood for. I arrived full of questions. How long has it been here? Who uses it? When I asked about the museum's function, people smiled at me as though I was slightly foolish, and began to tell me about Upernavik itself. I felt like a dog barking up the wrong tree, or perhaps a husky howling at the wrong hunter.

The building appeared strangely empty at first. It comprises several galleries, displaying a modest number of artefacts used by the island's earliest settlers: an old barometer and a ship's log book in one gallery, and in another, a tiny cabinet containing infinitesimal archaeological finds – a broken clay pipe stem, a rusted harpoon head. To my disappointment, and probably discredit, I couldn't get excited about these ancient remains. Rather than the numinous and powerful grave goods I had expected, they seemed to be just small, lost, broken things. Was I looking at a significant exhibition, or just a gathering of objects that hadn’t anywhere else to go? Never mind, I thought. There's always the icebergs.

As the days went by, I gave up my feverish questioning, and immediately - of course - everything began to fall into place.

Imagine walking round Joan Soane's Museum with a blindfold on. How could someone adequately describe those convex mirrored ceilings to you? The labyrinths of plundered plaster ruins? Approaching Upernavik Museum with a European mindset is equally unproductive. What might be experienced is completely obscured by an ingrained expectation of visual stimulus, a hunger for intellectual explanation or for a poetic conceit. The Inuit survived through waiting, watching, and listening, and to some degree these skills must be used to interpret the artefacts that survived along with them.

In acclimatising to Greenland, I have learnt never to expect a straight answer, or to demand a definite appointment. I have trained my eyes to see many colours in the snow, and to focus when watching the shifting dance of the Aurora Borealis. I have allowed myself time to be entertained, not by the flight of one raven across the bay, but by the story that unfurls in the moments elapsing between the flight of one raven and the next. With this oblique form of looking I began to notice presences in the empty building.

Upernavik does not need a grand institution with invigilators in branded t-shirts, Corinthian columns and a mission statement. There is a very thin and permeable wall between past and present everywhere on the island. Although the community has adapted to modernity, the objects that are desiccated and displayed in European collections are still proudly worn and used here. The legends are still cached in the memories of the islanders. It is not surprising that when you ask about the museum, people talk of Upernavik. Trying to define the purpose of a museum in such an environment is as complicated as trying to place the soul in human physiognomy.

At midday the museum's white walls reflect the first sunlight of spring, as does the ice outside. The ice is melting, that's for sure. But I hope that the museum walls will stay empty and reflective for as long as possible, and that the traditional life of the Upernavik islanders will not be condemned to the past.
Posted by NANCY CAMPBELL at 17:59

I've been following your blog for sometime and I found it passionating. Your notes and reflections on the greenlandic way are touching, personal and very well written. Congratulations. I think both Greenland (Upernavik) and you are lucky to have each other.

Keep up the good work!

Thank you so much, Mario! Hope your travels will bring you to Upernavik one day...