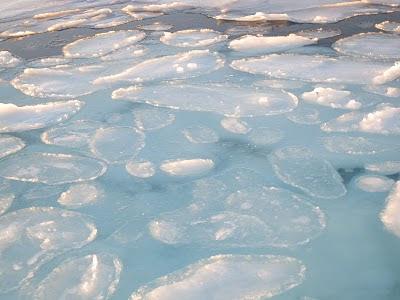 There's a word to describe the way each species perceives the environment around it, a potent mix of sensory perception and personal history that makes an island look very different to a human and a raven. Umwelt. There are as many Umwelten as there are lifeforms. The concept, developed by the scientist Jakob von Uexküll in the early twentieth century, suggests we cannot write objectively about ‘the environment’.

Umwelt explains my presence as a temporary observer on this island, and my subjective response to its people and the landscape. As well as distinctions between species, there are also differences in environmental perception between different peoples. My sense of scale and climate was developed in a temperate region. This means I fall over a lot on the slippery ground, causing much hilarity in the village. On another level, my sensitivity to ice will never be as ingrained as that of the fisherman who steps across the floes every day to catch halibut, a job that must rank among the most dangerous in the world. His understanding of the ice is a means of self-preservation. For me, the benefits (poetic composition) are less vital.

So the working title for the poems I’m writing in Upernavik has become ‘Umwelt’. It reminds me that I am a single observer, poorly qualified to make sweeping judgements about the beautiful landscape, the history of colonialism, and the battles between global industry and indigenous life.

Before coming to Upernavik I read a good deal of poetry inspired by enthnography (I mean by ethnographic science – there’s a case for arguing that all poets are enthnographers, with their deep investigation of object and ritual). Particularly memorable was Tom Lowenstein’s Ancestors and Species. I’ve also long admired Robert Bringhurst’s translations from Haida. Both writers are experts in their subject, which is woven into their life as well as into their work. My knowledge, on the other hand, is cobbled together in a magpie manner, with an eye for sparkle and synchronicity.

A danger of writing about a very different culture is that one gets so lost in the novelty of another’s Umwelt. The poetry – like holiday photographs – relies on the exotic flavour of the subject matter, rather than anything inherently interesting or well-expressed. This literary tourism focuses on facts and names and anecdote – and the numinous quality which characterises a good poem is not caught on the negative.

To avoid complacency, I’m writing in a form that I would not have been able to use had it not been for another colonial history. The pantoum is a derived from the pantun, a Malay verse form that was introduced to Europe by the French (via Victor Hugo) in the nineteenth century. A strongly repetitive and circituitous series of interwoven quatrains, the pantoum has since been employed sparingly by other poets: perhaps the greatest tour de force I’ve read is Ashbery’s Hotel Lautréamont. The fact that I can bring a Malaysian form to bear on this cold climate surprises me almost as much as the fact that I am here myself.
Posted by NANCY CAMPBELL at 12:59