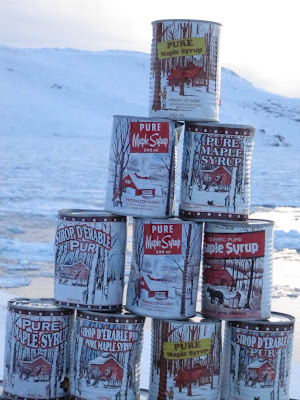 'Explore your own higher latitudes with shiploads of preserved meats to support you, if they be necessary;
and pile the empty cans sky-high for a sign.'

I’ve been asked to provide some children’s workshops during my residency at Upernavik Museum. As I’m exploring the traces humans leave on the environment, I thought it would be fun to draw on the snow, and what better way to do this than with maple syrup? (Fans of Helen Chadwick, look away now, for fear of bathos). I was inspired by Laura Ingalls Wilder, a Wisconsin author whose Little House in the Big Woods contains evocative descriptions of living off the land, including making maple syrup and sugar snow.

Boiling maple syrup poured on snow hardens instantly. It can be eaten spooned straight up from the fresh snow, or lifted free in fragile toffee shapes. Gastronomes suggest a chewing a gherkin to offset the sweetness.

Since there are no trees in Greenland, and certainly no sugar maple (Acer saccharum), I was ruminating on how to get my hands on the sweet goods to entertain Upernavik’s children. Happily, the Quebec Business Development Attaché came to my aid, and thanks to the enormous good will of the Federation of Quebec Maple Syrup Producers, gallons of golden syrup arrived post haste at the museum. The tins with their cheery images of Canadian homesteads were somewhat battered after a journey with Greenland Air, and had suffered further by being pulled down the icy hill in a sack behind the postman’s sledge. However, not a drop of syrup was lost. 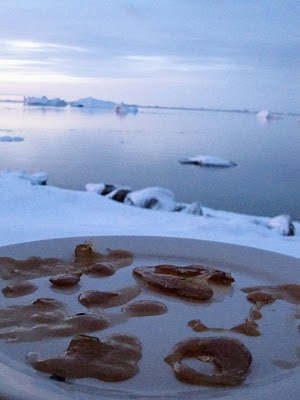 Initial experiments suggest the art of drawing with maple syrup cannot be mastered overnight, but the results are delicious. Never has language been so enticing or transient as these words written in the snow. In this climate, sugar dissolves faster than snow melts. The workshop is planned to co-incide with the celebration of the coming of spring on February 6th, which marks the first sighting of the sun above the horizon this year. Watch this space for a gallery of the results!
Posted by NANCY CAMPBELL at 13:16

Just ask the fisherman to help you. All you need to do is roll a tin onto the ice, or twenty if you please.... and dig a hole, and pour in the syrup and it shall drop through the water like heavy wax, so slow, and out of the blue sky onto my tongue.

I shall sit by the sweet roses in my garden till the syrup comes, with my tongue sticking out, as one does when catching snowflakes.

As you know, darling Campbell, I love syrup so much, I would be very pleased if you did pour in 21 tins, and I'm sure some very good poems would come out, which I'll write at night with a sparkler, freeze and blow them over to you so they appear in the aurora borealis, and then you can say to the children,

"Look! Poems from the Gods!"

[And I shall bow my head sagely, in my garden in England green.]

And then you can transcribe the borealis poems in the snow in maple syrup. And when the snow melts, many years from now, and the Arctic is hot and lush, yellow roses shall grow in the path of the poems.

And me? I shall just sit here looking at the butterflies in the air sweet from the yellow rose, and watch the sunset of the South and think of you.