Interview with a glaciologist


With the winter solstice behind us and without doubt some icy days ahead, this seasonal special celebrates the science of the ice core.

This year I began work on a new commission for Tertulia and Spike Island Studios. Dr Freezelove and His Amazing Orchestra of Deep Ice Cores investigates human interventions in the Arctic,  and in particular the ice core, which allows scientists to 'read' history in ice. (There's a great introduction to the subject in this short film from the Natural History Museum.)

I've been researching the work of glaciologists using ice cores and I was delighted when Dr Bob Hawley, from the Glaciology Research Group at the Department of Earth Sciences in Dartmouth College (USA), agreed to take time out between trips to the polar regions to do an interview. [We have another reason to like Dartmouth College - How to Say ‘I Love You’ In Greenlandic: An Arctic Alphabet has a home in the Rauner Special Collections Library there.]

Bob Hawley started working as a glaciologist in 1995 as an undergraduate at the University of Washington. Following the completion of his BS degree he continued in glaciological research by participating in the inaugural winter-over at Summit camp, Greenland, during the 1997-1998 boreal winter. He earned a Ph.D. in geophysics from the University of Washington in 2005. He has worked primarily in East and West Antarctica and Greenland. 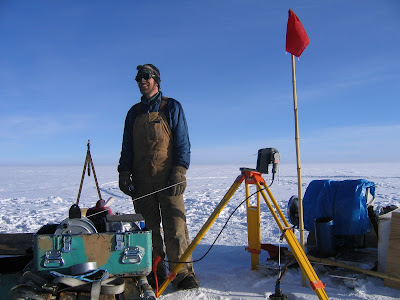 
NC: How did your interest in earth sciences begin? Do you see a connection between your current research interests and your formative experiences?

RH: I knew that I wanted to do science (not necessarily knowing I wanted to be a scientist) in 5th grade when we took a field trip for marine biology in Rockport, Massachusetts, a location where I’d already spent a lot of time playing, and I saw for the first time the incredible detail of what people understood about the natural world.

In college, I cast around for majors in the sciences, taking introductory courses; each major seemed more compelling to me than the last, from Geography, to Atmospheric Sciences, to Oceanography, then finally to Earth Sciences. Earth Sciences seemed like the one for me, but I went beyond to experiment with Forestry to confirm that Earth Sciences was really where I wanted to be.

After studying for a while, I knew I was interested in the surface of the earth, as opposed to its deep interior. I had an opportunity to travel to the Antarctic as part of an expedition there. I could not pass that up. Right then, and through the experience of my work in Antarctica, I determined that glaciology was what I wanted to study. At that time (mid–late 90s), glaciers were not nearly as “sexy” as they are today, and so I didn’t anticipate I would find a job working in glaciology, but I figured that at least I would be able to spend some good years working in it before I had to “find a job” and “enter the real world”.

When I look back even further, as a kid I was always fascinated by the National Geographic magazines that my parents had in stacks. I gravitated to the articles and pictures of cold places – Antarctic crossings, climbing Everest (although underwater exploration also fascinated me at the time). I’d like to be able to say that I knew then that I wanted to work on polar ice sheets, but I didn’t. And the fact is, I never even considered it to be an option – how is it that you get to go to these places?

You open your PhD thesis with a quote from Wallace Broecker, "The climate system is an angry beast and we are poking it with sticks." Do you feel science can ever appease the environment?

That’s an interesting question – I guess I feel that any appeasement would have to come from policymakers, not scientists; as scientists, we work to learn about the natural world, and to learn how it works, but to attempt to take action to affect the natural world is not actually science. Certainly science informs what we decide to do, but these decisions and the actions themselves are ultimately policymaking and decision-making, which are human endeavours.

Your research describes vast tracts of time and you often work in remote places. Has your research affected your ideas about the human condition?

I think probably so. One thing I encounter often when discussing the state of the Earth or climate change, is that often people will say something along the lines of “Earth has a way of coming back to equilibrium – it will bounce back”. I can see that this is definitely possible. But if my geological training has taught me anything about humans’ relationship to the Earth, it’s that we haven’t been around for very long, and as far as the Earth is concerned, we needn’t be around very much longer. I often reply to such people with “that may be so, but Earth’s solution may well not involve humans!”

In your dissertation, you explore new borehole technology, with the focus on video-based techniques. Can you tell me more about the different methods you have explored for dating ice?

For many years, researchers have used visual stratigraphy to “see” back in time using ice cores, snow pits, and many other layered deposits. The fundamental premise is that snow deposited in the summer “just looks different” than snow deposited in the winter. Richard Alley crystalized this thought in a paper he wrote in the Journal of Geophysical Research, where he discussed the physical science basis for this kind of dating – the “depth hoar/wind-slab couplet” in which coarse-grained, low density snow from the spring and summer is overlain by a fine-grained, high-density layer – this distinction is easy to see visually. When I started using a video camera in firn boreholes, it was to locate artificial markers that we had placed in the borehole. When moving the camera between markers, I noticed that we could see very subtle variations in the brightness of the borehole wall. This was what led to the development of what eventually became Borehole Optical Stratigraphy, which we’ve used to date some boreholes.

I notice from your blog Cold Climes that one ice core (from 2010) was named Owen, after a collaborator’s newborn baby. Is naming cores a common procedure?

All cores need some kind of name, so that the data from the core can be referenced to a specific core, a specific place and time. Many projects that have large numbers of cores use a derived naming scheme that incorporates abbreviations of locations, projects, and dates – for example, SUFA-06 would be the Summit Firn-Air experiment, drilled in 2006. For the Owen core, it was the only deep (100m) core we planned for the project, and so differentiating it from other cores in the project was unnecessary. We often name cores and boreholes after people involved in the science, for example the boreholes I used for four years at Summit [the Greenland Environmental Observatory] were named Katie, Toby, Meg, and Phillips, after the science technicians who did much of the work for that project. I feel like this brings a little more humanity to the science, as long as there aren’t too many names to juggle.

Can you tell us how you hope ice cores will be used in your future research projects?

One of my ongoing goals is to characterize the spatial and temporal variability of snow accumulation in Greenland. To do this, we often use radiostratigraphy, the practice of sounding through the ice with electromagnetic waves, and interpreting the stratigraphy that we see in the returning waves. Researchers at Scott Polar Research Institute did some of the pioneering work in this area quite a long time ago, and we still use similar (but updated) equipment to what they worked with then. Where ice cores enter the picture is that at one spot along a radar transect, the ice core can pin the accumulation rates perfectly; we can get exact dates on the ice core from a combination of layer counting and chemical analysis. From this, we can pin dates on our radar layers, which we track from one core to the next. Ice cores are thus critically important for this kind of work.

What will your forthcoming expedition to Antarctica study?

My colleagues from New Zealand are drilling a core at Roosevelt Island, a small ice rise in the Ross Ice Shelf. As part of the project, my team will be measuring both optical stratigraphy and temperatures in the borehole. Optical stratigraphy will help us determine if there are any sections of the borehole that are not represented by our cores (i.e. we lost some core pieces), and also may help us determine the rates of vertical ice motion at the site.

The temperatures we measure will be valuable for three important reasons; first, part of our project is modelling ice flow in the region, and the rheology of ice (how the ice responds to being squeezed) is highly dependent on its temperature. Second, geothermal flux (how much heat flows from the ground into the ice) is poorly constrained in Antarctica, and our measurements will provide a point measurement of this flux at Roosevelt Island. Finally, if you understand how heat flows in ice, you can use the current temperature of the ice to determine what the past temperatures must have been. This is like what would happen if you pulled a frozen turkey out of the freezer and placed it directly in the oven. Thirty minutes later, although the outside of the turkey would be hot, the center of the turkey would still be frozen, as if the turkey was still in the freezer. How thick the hot outer layer of the turkey is depends on how long it’s been in the oven, the temperature of the oven, and the thermal properties of the turkey. If you know the thermal properties of the turkey, you’d be able get a feel for how long it’s been in an oven of what temperature. We can do a similar analysis on the ice sheet.