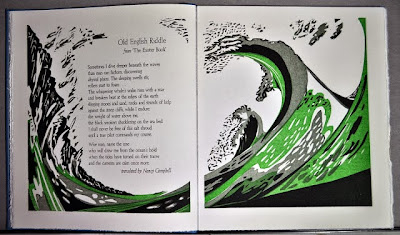 I like riddles. Perhaps Gollum's 'Voiceless it cries, / Wingless flutters, / Toothless bites, / Mouthless mutters' in The Hobbit was the first I encountered. Then the far more ancient, suggestive kenning of Anglo-Saxon riddles from the Exeter Book. The equivocal scraps, stones and body parts that voice the works of the poet Vasco Popa.

Writing a riddle demands concision, yet the frame of reference must be universal. Why title any poem with anything but a question mark? When I start writing about one thing, I soon notice that I’m describing another. A small object takes on a greater significance. This same shape-shifting perspective may be what draws me to Inuit ivory sculpture, tiny objects that from one angle may be a polar bear, from another, a human being. You head out in one direction, but find yourself somewhere unexpected.

It was a great honour when Frances and Nicolas McDowall of the Old Stile Press contacted me to ask permission to use my translation of one of the riddles from the Exeter Book in a new anthology of writings on water.

The Third Thing is a selection of poems with woodcut images by Ralph Kiggell. Water and swimming have featured strongly in Kiggell’s life and when the Old Stile Press commissioned a second book to follow his hugely successful Leading the Cranes Home (2006) it was only natural that the subject should be ‘water’.

A generous slideshow of pages from the book can be seen on the Old Stile Press website, where the publishers write:

"Roger Deakin, the author of Waterlog, linked the passion to swim to our body’s mystical sympathy for water: ‘When you swim, you feel your body for what it mostly is - water.’ However, swimming was not to be the focus of the book and Ralph allowed himself to explore poems and prose from across different ages and cultures. Writers have shown us that from sea to land to cloud and back to sea, the cycle of water encapsulates history and life itself. ... There are driving shafts of rain, frozen crystals, rivers which support teeming life on boats, clouds heavy with impending downpours. All derive from D.H. Lawrence’s wonder at the unknowable ‘third thing’ that, with an oxygen atom and two of hydrogen, completes the mystery of water."
Other poets in his selection include Robert Frost, Wallace Stevens, Padraic Colum and John Masefield. As well as the riddle, I have contributed a new poem, written in collaboration with Anna Zvegintzov, ‘The Last Assignment’.
The book can be purchased from the Old Stile Press. Main Edition: ISBN 978-0-907664-89-5 £340 (plus p&p);  Special Edition: £1250 (plus p&p). 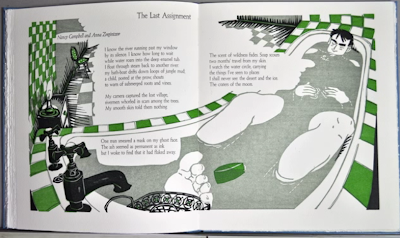