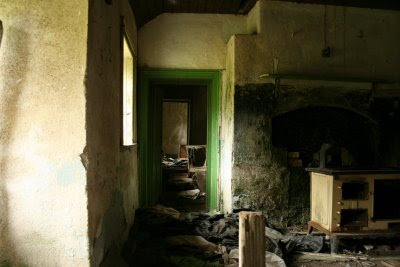 For the last few weeks I've been collaborating with the artist Paula Naughton. Paula is a photographer who I first met when we were both working at The Center for Book Arts in New York in the early noughties. Our first collaboration was on t-shirts sourced from the garment wholesalers around the Center and printed with wood type. The current project is taking shape around a series of photographs of a derelict country house in Ireland.

My words should illuminate Paula's images, so rather than reiterating what she shows I'm trying to shift my focus sideways to avoid repetition. A collaboration is a little bit like dancing: instead of copying the other person's movements you should listen to the shared music. It helps to have a long-standing knowledge of the person you are working with.

Paula’s strength is an impetuous, sharp intelligence which she combines (unusually) with both a lyrical imagination and practicality. Like many photographers, she’s an illusionist, playing with light. She knows that the appearance of a scene conceals many stories. Her world-view is curious and evocative, suggestible to memory and changes over time.

The sense of loss in Paula’s work is a problem to me - I can only express personal reactions to an emptiness which is usually left for the reader to interpret. Yet I don’t want to clutter this cathedral silence with my cracked voice.

Objects: stained mattresses; bedsprings laced with leaves; old mirrors; a nest of twigs in a chimney. I drafted some prose poems about these artifacts but even the vaguest stories seemed presumptive. I wanted to write not about the domestic scene but my awareness of the images as photographs. I began to look at the sense of stillness in the rooms, the way light intruded on otherwise abandoned rooms and introduced a sense of time passing. Light has always been a metaphor for spiritual awakening. Paula's photographs suggest the arrested moment of discovery, which made me consider how a scientist would have captured such a scene – the masses of related objects, the speed of light, the complexity of fixing time in quantum theory. In the stillness ideas lurked. Einstein believed that equations waited to appear to the right person, like writing in steam on a mirror.

Once Paula suggested slides as a format, my ideas for a scientific text were given greater scope. I imagined photos and words imprisoned between glass like cells under a microscope, ready to be subjected to the viewer's eye. I like the miniature intensity of slides, and the use of a light projection also references the original act of photography. Alongside my own text, equations will offer finite equivalents to the light rays interrupting the abandoned rooms: the Angle of Minimum Deviation of Light, the de Broglie Equation, Newton’s Rings and Young’s Slits.
Posted by NANCY CAMPBELL at 16:21